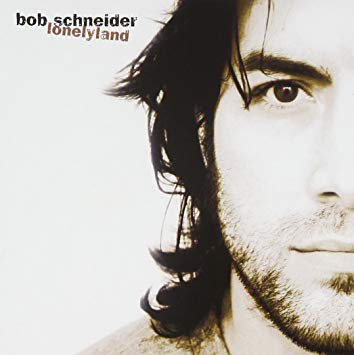 The profane and the profound have always tumbled with equal ease from the lips of local Austin hero Bob Schneider. A University of Texas dropout, Schneider was the charismatic frontman of his raunchy party band, the Scabs — he’d also fronted local favorites Joe Rockhead and the Ugly Americans — while at the same time writing sensitive songs of despair, dejection and love that would ultimately comprise his major label debut.

The story behind the making of Lonelyland was, in fact, a musician’s dream come true. In 1999, Schneider formed a solo act, initially under the name Lonelyland, which became the title of his album. Thanks to his popularity around Austin, the CD sold more than 15,000 copies at Waterloo Records alone before Universal came a-courtin’ and re-released it to a national audience two years after it was recorded. It didn’t hurt that Schneider was dating actress Sandra Bullock at the time.

Lonelyland’s stellar collection of songs — marked by literate songwriting, catchy hooks and daring production — reflects Schneider’s eclectic tastes, incorporating jazz (“Madeline”), funk (“Bullets”), bossa nova (“Moon Song) and even a bit of opera (“Round & Round”). It’s also distinctive because of Schneider’s wry sensibility, his marvelous gift for melody and the album’s thick bass, which enriches the texture rather than merely serving the groove.

There are hooks galore throughout the album, making even a pair of seven-minute tunes seem short. Nearly an hour into the record, Schneider serves up “2002,” a musical missive from a slacker to his ex-girlfriend that’s both funny and melancholy. In another era or a better world, it might have been a strong contender for song of the year. Not that Schneider needs any additional hardware for the mantle: since Lonelyland, the maniacally prolific songwriter has won just about every major category at the Austin Music Awards annually (or so it seems).

Schneider has never fit the stereotype of Texas singer-songwriters: there’s no twang in his vocals, and he’s always had more in common with Elliott Smith or Freedy Johnston than with Lyle Lovett or Townes Van Zandt. And too often, he’s been a favorite punching bag for Austin’s hip kids and music writers. But you can’t accuse the guy of being monotonous. He may be all over the map stylistically, but on Lonelyland that was a good thing.