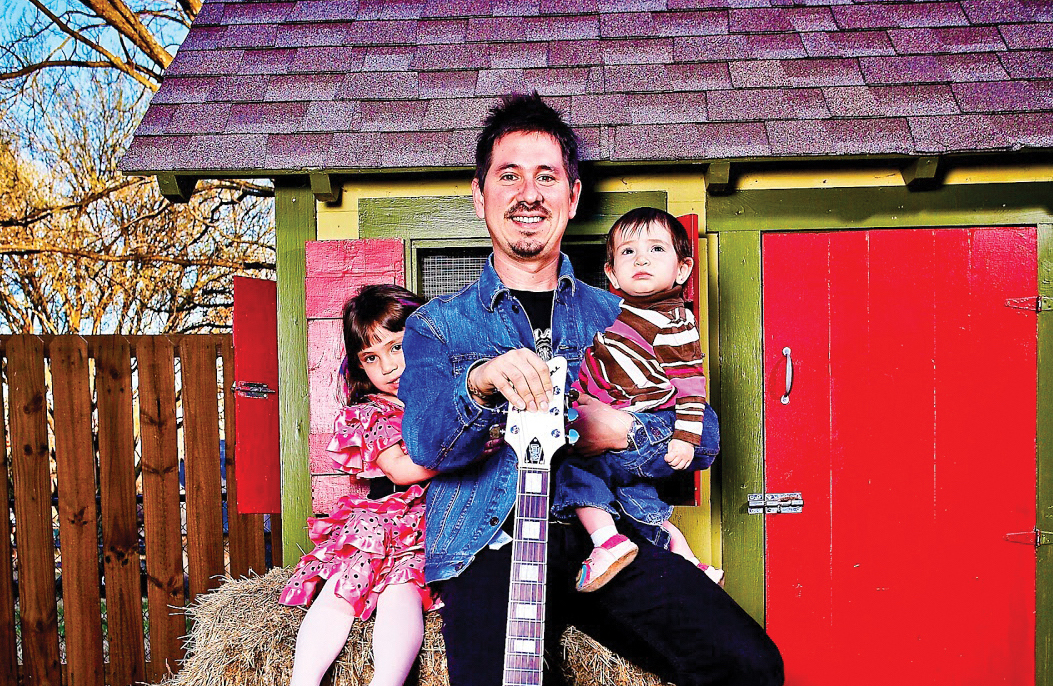 IN HIS BOUTIQUE studio, Electric Deluxe Recorders, an unassuming Adrian Quesada remains comfortable in his skin and at home — not only because the warm and inviting studio is attached to his Austin house. It’s more because the evidence is in a spectacular resume that precedes him. His sturdy musical proofs of concept remain.

Adrian Quesada’s vision continues to endure as a creation of multi-colored identities, able to weld the diverse Latin, soul, rock and funk melodies into universal salvos. Texas’ version of Quincy Jones fully embraces his treasure trove of endowments as one of the music industry’s elite facilitators.

On the back of a stout release of originals based on vintage Chicano soul, Look at My Soul: The Latin Shade of Texas Soul, co-operatively released with Amazon Music and Nacional Records, presents a fresh gaze upon an age-old coalition between Latin and R&B. It’s an idea born over 15 years ago as a member of the famed Latin funk orchestra Grupo Fantasma after a taping with legendary Tejano star Ruben Ramos.

“In Grupo, we were playing Latin music — music that was technically our culture,” Quesada adds, “but we all grew up on hip-hop. That’s what led us to funk and soul.”

Sure enough, the South Texas native arrived in Austin as a hip-hop producer, well versed in the looped samples taken from the likes of James Brown and the Meters, an influential New Orleans funk outfit. Interestingly enough, his hometown of Laredo sits closer to the Mexican metropolis of Monterrey than San Antonio by about 10 miles, yet many of his first musical heroes — some remaining so in the present — were the pioneering producers of rap’s so-called “Golden Age.”

“As much as I love full-band live recordings — all live instruments and everything — there’s something magical about a hip-hop production that’s absolutely genius,” he says. “Producers working samplers, like Pete Rock, DJ Premier and [the late] J Dilla … I hold them in the same regard as a producer who records live musicians.”

He’s been able to reach back into his roots with sociopolitically aware Texas and Georgia-based trio Third Root, purveyors of Trill Pedagogy, who are in the midst of a season-themed run of extended plays, each focusing on distinctive topics.

“He’s been a hip hop head for years, so his knowledge of the foundations — which hasn’t always been sufficiently expressed in some of his other output — exists in him,” says Root member Charles “Easy Lee” Peters, who’s also a teacher in Atlanta. “That, to me, is the rare piece because [his ability to] interpret music in so many different ways was critical.”

“He approaches the music through the soul and funk, in the hip-hop samples, which helped us develop that chemistry,” says Marco “MexStep” Cervantes, a Root member and also a doctorate-holding professor at the University of Texas at San Antonio. “He magnifies our sound to higher levels, after he’s heard our verses and applied his edits. He just makes great decisions.”

Cervantes trusts Quesada, at this point, to the extent that he’ll also produce his upcoming solo release. Quesada, also a member of Latin funk-rock outfit Brownout, however, has been locating and working with new talent.

He recorded and assisted in the production of Spanish-language soul chanteuse Angelica Rahe’s shimmering EP, Love, Translated. Shortly after completion, the singer-songwriter, raised in Spain and Japan, reflected on one of Quesada’s noteworthy qualities: knowing when not to insert himself.

“As a young female artist, a lot of times when I go into a room with a producer, I have to prove myself. It’s kind of like, [condescending tone] “Okay, little one,” she explains. “With Adrian, I came into the session with material already that I wanted to knock out, and he took my lead. There are different ways to produce, and sometimes the best way to produce is getting out of an artist’s way and supporting their vision.”

His primary project, conversely, requires him to jump in head first as a songwriter in psych-soul duo Black Pumas with mysterious vocalist/lyricist Eric Burton. Quesada wanted a new voice; someone untied to another act. He’d initially put out a worldwide APB for vocalists. However, a chance coffee with a neighbor drew up Burton, who’d arrived in Austin only 18 months before.

“We emailed, and he called me one day and sang,” Quesada explains. “He was blasting it from his computer and sang into the phone. I knew right away. So we started slowly, working for months before we decided to make it a real thing. It was like we didn’t know what we were going to do with it. But two songs turned into four then five, six, seven. Next thing you know, we had 10 tracks.”

They also decided to play live “just see if anybody cares.” (This is one of Quesada’s other endearing qualities — he doesn’t assume success.) The shows were a rousing triumph. “Black Moon Rising,” a stout classic soul single released on Karma Chief imprint via Brooklyn’s Coalmine Records, features the pair in perfect marriage as artists. Burton’s transcendent vocal chops and Quesada’s sonics recall an alternative past in which the Pumas would’ve been rivals in the Southern soul circuit with Percy Sledge, James Carr and Otis Redding.

As it were, as confident as he was about their future, he wasn’t sure what they’d be until he started in on a record, which was supposed to be the beginnings of Look at My Soul. Now completely sidetracked with a sustained burst of inspiration, Quesada wrote and recorded numerous demos, which he fleshed out with a makeshift band. The sessions became the foundations of the Pumas’ forthcoming, untitled debut.

“I had downtime I was going to use to start writing again,” he says. “But instead of Look At My Soul, 15 to 20 Black Pumas songs came out. I’m like, ‘This isn’t like a Chicano soul thing. This is something else, but I’m just going to keep writing it.’ I was like flowing and ideas were coming and songs were just kind of happening fast.”

With a long-play completed and at the ready, the multi-instrumentalist is evidently excited about the Pumas’ prospects, even in his subdued way. “Once we kind of got momentum, I thought, ‘Okay, this is a band,’” Quesada says. “This is a sound we came up with together, and these musicians who are playing with us are helping realize it. Eric’s a rare generational talent; I couldn’t pass up this partnership.”

In a return to his cultural roots, Look At My Soul is a tribute to the players he’d learned about through his time playing, but also in his collecting of vinyl — specifically the oft-overlooked Latin soul coming out of San Antonio and traditional Mexican music, such as Tejano, cumbia, ranchera and Norteño. However, the decision to drop a record on Amazon Music is curious, though there’s precedence with well-curated lost/deep catalog soul labels like Chicago-based Numero Group and UK-based Soul Jazz Records.

“What made it exciting was that [Amazon Music’s artist relations rep] Stephen Brower was passionate about music,” Quesada says. “Having an opportunity to partner with Amazon, with their resources and network, is a no-brainer, as tricky as it is now to get people’s attention. Most important for me, when I met with Steven, I was floored by his musical knowledge and passion.”

Quesada continues to dive back into the wells of soul and funk-influenced music of the ’60s and ’70s Texas because of its uniqueness. Given the sheer size of the state, the length of the border with Mexico, the subtly diverse Latin/Chicano soul could only have occurred and thrived in Texas.  “You hear the Mexican influence in how the horns play, almost like mariachi horns,” he explains, grasping. “Sometimes they sang in Spanish.”

He trails, attempting to nail an essence.

“Everything to me it’s … I just wanted to make a record that was like a proud ‘Texas’ statement … that there was no way it could have been anything else. I love Stax and Motown, but I just felt this pride having been born and raised on the border in Texas. This is what I know. I’ve lived here all my life.”