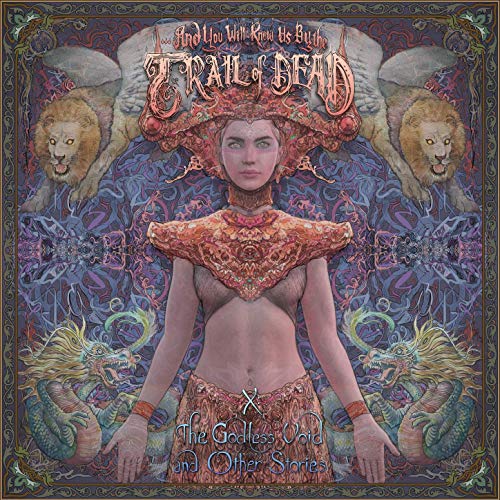 It almost seems a lifetime ago that …And You Will Know Us By the Trail of Dead strode atop the world of indie rock, the cutting edge of a fresh, sharp sound that would propel rock into its next great iteration. It was 20 years ago now, give or take, but that next iteration never quite came—or maybe it did, and it simply wasn’t as exciting as we’d hoped. In any case, “indie rock” as a cultural and commercial pillar may be a relic of the past in the Age of Instagram. But on X: The Godless Void and Other Stories, Trail of Dead reestablishes themselves as a musical force. It’s been six years since the band’s last record, and time has worn down some of the rawer, ragged edges of their earlier, post-alternative paeans to mystery and electricity. But song titles like “All Who Wander” and “Who Haunts the Haunter” give a clue as to the recent headspace of group mainstays Conrad Keely and Jason Reece: far from settled. On the pounding semi-title track “The Godless Void,” Reece belts out lyrics like “Into the American void / We hold so dear / Yet fear as we evolve,” and there’s real power and discontent when he shouts, “Out of the godless / Into the fires, we are thrown.” Ten albums in, Trail of Dead are perhaps less comfortable than ever with the state of the world and their place in it. The emotional swells continue in the guitar-driven standout “Don’t Look Down,” which finds Keely struggling to understand a once-important personal connection long after it has disintegrated, and on “Something Like This,” a great little emo tune that finds him fumbling to remember the rhythms of the past. There’s a desperation to these songs that gives them a striking vitality for a group considered by plenty to be past it. None of the riffs quite attempt to recapture the crunch of their early days, but the moody synth elements on “Eyes of the Overworld,” “Gone” and album closer “Through the Sunlit Door” help Trail of Dead soar as high as they’ve perhaps ever gone. For both the band and the indie rock scene in Texas they conquered, the excitement of what’s to come has surely been dulled since the early 2000s. But on Godless Void, Trail of Dead do achieve the promise of their earliest days, even if the world and its hurts now sound so much different than they did then.

…And You Will Know Us By the Trail of Dead
X: The Godless Void and Other Stories
Dine Alone