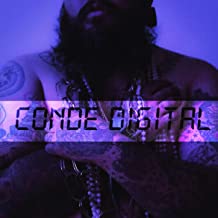 Is there such thing as the “right time” for a gay rapper to arrive? The notion isn’t to say that there aren’t any rappers identifying as male and queer, but the stigma, unfortunately, remains a dark cloud over the genre. As an openly queer rapper, Conde merges hip-hop, indie rock, drag culture, and avant-garde experimental art-punk. The San Antonio–stationed artist’s honesty reigns over his material, which covers his overcoming a drug addiction and internalized homophobia. Produced by longtime associate Chris “KDeath” Martinez, Conde Digital is Conde briefly extending into self-reflection, investigating inner conflicts with depression, romantic relationships and deep-seated fears of acceptance — with him, his family and the rap community. The album, most importantly, is also packed with incredible lyricism. Conde can rap rap. “Year of the Queer” is an abrasive, anthemic flag-planting that harkens back to his and Martinez’s noise-rap origins. The San Antonio Current journalist checks himself on “Fire,” with a bit of self-flagellation over his struggles and associated recurring feelings of shame. “Money” tackles his replacement of drugs and alcohol with a shopping addiction. Conde Digital isn’t just “dope for a gay rapper”; it’s a statement of authority, destroying notions of sexuality somehow being a hindrance to the quality of hip-hop—an often homophobic, cis-male dominated genre. Conde, come hell or high water, is staying the course for himself first, but also for progress in the normalization of the LGBTQ journey.