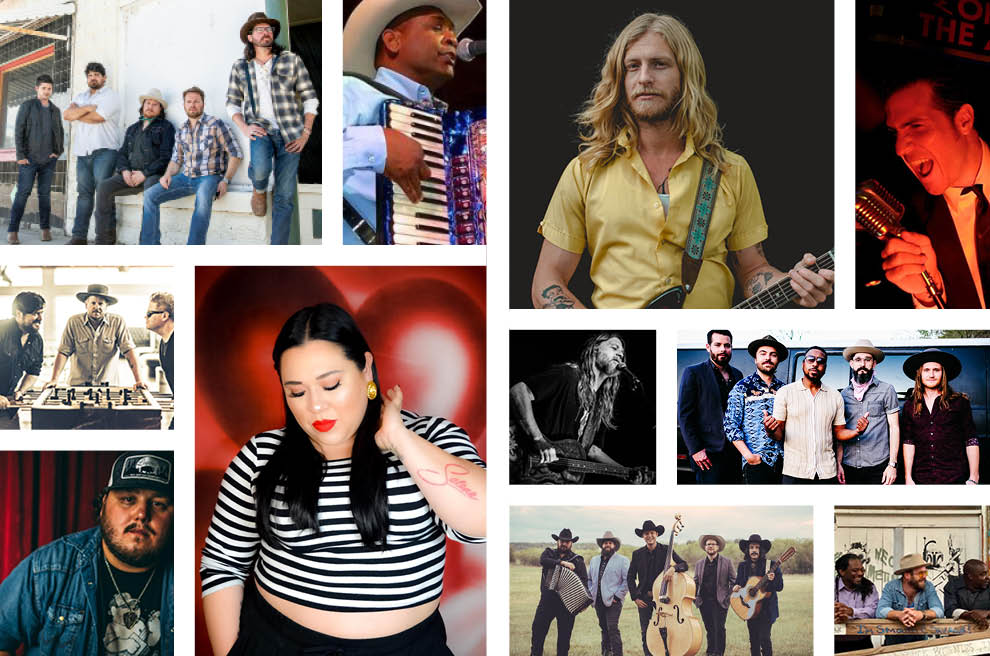 Over four days in April, the inaugural Conroe Crossroads festival will bring live music to stages across Conroe with 40 shows featuring dozens of artists known for genres ranging from Americana to zydeco, with blues, country, soul, Tejano and more in between. Get to know the artists and make plans to see your favorites and discover new faves at conroecrossroads.com.

Beat Root Revival
Ben Jones and Andrea Magee traveled thousands of miles from their original homes of England and Ireland to put roots down in Austin. Since then, their humble and genuine brand of harmony-laden folk rock has earned them a loyal legion of fans, thanks in no small part to their intimate and prolific performances.

Bidi Bidi Banda
Bidi Bidi Banda went from a fledgling passion project over five years ago to one of the premiere Selena tributes in the world, thanks, in part, to the dedication of band leader Stephanie Bergara. In addition to bringing the spirited music of Texas icon Selena to life with every show, Bidi Bidi Banda has become a powerful voice for change and equality in the Texas music community and beyond.

Cannon Brand
Though still early in his young career, Cannon Brand has honed his craft as a songwriter since he first picked up the guitar at age 7. After years of headlining shows and opening for artists like Cory Morrow, Roger Creager, Randall King and Deryl Dodd, Brand began releasing his own music. His most recent single, “Still Around,” shows Brand is ready to carry the Texas country songwriting torch.

Geno Delafose
One of the forefathers of nouveau zydeco, Geno Delafose is a Louisiana born-and-bred zydeco wunderkind whose work has influenced new generations of zydeco artists and accordionists. With roots firmly in Creole and Cajun music, Delafose carries on the legend of his famous father, John Delafose. The younger Delafose earned a Grammy nomination in 2007 and keeps a busy performance schedule to this day (though still finds time to raise cattle and horses on his Louisiana ranch).

Harvest Thieves
Harvest Thieves continue to impress using daft wordplay dressed in rock ’n’ roll drapery. As with many energetic outfits, their recordings are only a preview for their real-deal live performances. Harvest Thieves credit their sound to blue collar upbringings and “back roads” heritage combined with the blunt force of garage rock and a dash of traditional country honesty. The band teeters between “punk-ish explosions in sound” and “finger-picked folk-rock simplicity” to deliver a unique twist to Austin’s rich musical tapestry.

Jomo & the Possum Posse
The self-proclaimed (with tongue firmly in cheek) “greatest band in the world,” Jomo & the Possum Posse may have first come onto your radar thanks to their bizarre yet wildly popular “Guy On A Buffalo” videos that amassed tens of millions of views back in 2011. That trope lives again with a Zaxby’s nationwide spin-off featuring a “Guy On A Buffalo Wing.” But the band isn’t just hilarious. Led by Jomo Edwards — who won Merlefest 2021’s songwriting contest in the general category — the band is a collection of deft musicians who can elicit introspection as much as a laugh.

Jordan Matthew Young
Jordan Matthew Young was a finalist on season 20 of the hit singing show The Voice, joining coach Blake Shelton and impressing audiences with his soulful renditions of classic rock and country songs, including a finale ode to Texas and country legend George Strait. But Young was an experienced musician long before the show and has since resumed impressing crowds around Texas — albeit with a significant profile boost. His most recent release is the eight-song A Real Good Time.

Kevin Anthony & G-Town
Originally from South Texas, Kevin Anthony & G-Town are the Gulf Coast Sound. The group brings a little Peggy Sue, Cajun fiddle, jumping sawdust and mama too to everything they do. It’s the kind of music your grandparents might have listened to on old-fashioned radio, but don’t mistake it for nostalgic — it’s simply authentic. Exemplifying their love for Cajun music and culture, Kevin Anthony and company put out Eh Ha Ha: A Tribute to the Original Cajun Fiddle of Harry Choates in 2019.

Kevin Galloway
After more than a decade as the frontman and principal songwriter of the Americana/rock band Uncle Lucius, Kevin Galloway is regarded as one of Texas’ purest and most soulful voices. In 2018 he released a solo album called The Change, saying it was “a love letter and a promise to my newly formed family.” The spirited singer continues to move audiences across Texas and beyond, leaning into his soulful sound and Gulf Coast roots.

Keyun & the Zydeco Masters
In 2010, Keyun was crowned the Accordion King by TX Folk Life, a nonprofit organization in Austin. A highly respected name in zydeco circles, Keyun started his band, Keyun & The Zydeco Masters, all the way back in 2003. Keyun and company have released four albums since 2019, including a live album in 2021. He’s no stranger to the Houston area as a sought-after and entertaining performer.

Left Arm Tan
It’s fitting that a band that took its name from a Wilco song eventually releases a new album produced by Wilco’s Ken Coomer. That album, Undefeated, comes out in April and exemplifies the Fort Worth six-piece’s underlying attitude toward what it means to be an indie Americana band in 2020 and beyond. Earning critical acclaim since their 2010 debut, Left Arm Tan continues to release a steady stream of lauded and beloved albums that constantly straddle the line between rock, folk, country and something slightly undefined.

Micky & the Motorcars
Micky and the Motorcars are celebrating 20 years of dust-kicking rock ’n’ roll. The edgy Americana five-piece is rooted in the harmonies of brothers Micky and Gary Braun, two in a line of Braun boys carrying on the family’s musical tradition. Rounded out by three of their pals and a tour that never really stopped, Micky and the Motorcars have managed to etch their name in the annals of Austin’s vaunted alt-country rock ’n’ roll scene. Their most recent album, 2019’s Keith Gattis-produced Long Time Comin’ earned critical praise.

Rochelle & the Sidewinders
Award-winning blues outfit Rochelle & the Sidewinders have accomplished a lot since being founded in 2015. Fronted by the dynamic Rochelle Creone, the five-piece band are repeat winners of the Heart of Texas Blues Challenge, International Blues Challenge semi-finalists, and festival mainstays. Their most recent album is 2020’s Something Good, and Conroe Crossroads attendees are sure to find precisely that at the Sidewinders’ electric performance that mixes originals with blues classics.

Sheila Marshall
Sheila Marshall grew up in Nacogdoches listening to Emmylou Harris, Willie Nelson and Patsy Cline. And while she spent a decade in a musical partnership with Matchbox Twenty’s Kyle Cook in the band Rivers & Rust (which saw her tour the country opening for Matchbox and Counting Crows), Marshall always felt those classic songs coursing through her veins. It makes sense, then, that she immediately resonated with mentor and co-producer Ray Wylie Hubbard, who says “Sheila’s music has tasty, back porch, lo-fi, cool, soulful sounds.”

Sour Bridges
Texas’ favorite “browngrass” band (’cause, you know, it’s like bluegrass but dirtier) returns again with their festival-ready, boot-stomping sound. Marrying the ’60s style of bands like the Byrds and the Beatles with back porch roots music, Sour Bridges first emerged in 2009. Since then, the quintet has released four full-length albums. Their most recent release is the 2020 single “Roll Me Up Something Good,” which critics have likened to legends such as the Band and Texas Tornadoes.

Southern Disposition
Debbie Glenn has been an integral part of Conroe’s growing music scene for years, so it only makes sense that her band, Southern Disposition, graces the stage at the first ever Conroe Crossroads Music Festival. Glenn is the owner of the Red Brick Tavern, a music venue and restaurant in the heart of Conroe that has provided a stage for some of Texas and beyond’s best up-and-coming artists for a decade. And when Glenn and company step on stage, they serve up, in their own words, “a pinch of country, a smidge of Southern rock, a dash of blues a pound of fun — and a whole lot of ‘bless your heart.’”

Tanner Usrey
Hailing from Prosper, Texas, Tanner Usrey has been on the scene for only a few short years, but his star is already fast on the rise. With a soulful voice reminiscent of singers like John Moreland and more than a little Red Dirt influence in his pen, Usrey turned heads with his 2019 debut EP Medicine Man. His follow-up, 2020 single “The Light,” appeared in the hit TV show Yellowstone, while his most recent release, the 2021 SÕL Sessions EP showcases Usrey’s blues-rock leanings.

Tomar & the FCs
Bringing serious soul from Austin, Tomar & the FCs frontman Tomar Williams honed his craft as a jack of many trades in the music industry, including time as a producer for some of Houston’s buzziest rappers like Big Mo Mike Jones, and Paul Wall. The band has achieved quite a bit in its few short years back on the scene, including a spot on NPR’s lauded “Tiny Desk Concert” series and multiple official SXSW selections. They signed with Houston-based label Splice Records in 2019 and released their sophomore album, Rise Above, in 2020.

Tyler McCollum
Conroe native Tyler McCollum began playing guitar at age 10, diving head-first into the works of “songwriter’s songwriters” like Hayes Carll, Adam Carroll and Davin James. After spending time around Stephenville and Nashville, McCollum settled on Austin as his new home and released his album Backbone in 2019. Blending the lyrical sensibilities of his songwriting heroes with the energy you expect from plugged-in Texas country, McCollum has built a workmanlike presence around Texas with his live performances. Music runs in the family, too — he’s the older brother of Conroe’s recent breakout artist Parker McCollum, who just won Best New Male Artist at the ACM Awards.

Walt Wilkins
Few Texas singer-songwriters can claim the kind of work ethic of Walt Wilkins, who earns the troubadour badge in every sense of the word. With more than a dozen albums under his belt, cuts by hundreds of other artists, multiple residencies, tours and even credits as a producer on other records, Wilkins is a consummate musician. His 2021 album, Pedernales, is 16 tracks of “heart on your sleeve” and stories. In addition to his solo work, he performs with frequent collaborators the Mystiqueros and with his wife, Tina, a talented artist in her own right who routinely joins Wilkins on his recordings.

Zac Wilkerson
Zac Wilkerson likes to say he was kind of “tricked” into a music career after winning the vaunted Blue Light Live Singer Songwriter contest in 2011. But the truth is, Wilkerson was born for a career as a soulful country rocker. He first started singing in a tiny country church at age 4, becoming a multi-instrumentalist by age 12. He credits his parents’ album collection for inspiring love for everything from country and soul to Motown and folk. His most recent album is 2020’s Evergreen, released via Prairie Rose Records.

Zack Walther
Zack Walther grew up on ’90s alternative rock, the Beatles, and Simon & Garfunkle. Maybe not the most obvious combination, but one that has certainly informed Walther’s edgy rock ’n’ soul sound. A professionally trained vocalist, few singers in the scene deliver this signature Texas sound with the precision and heart as Walther. In fact, Walther and his band are so committed to their craft that they put out two live records before they released any studio albums. Their most recent, 2019’s The Westerner, is 10 tracks replete with good times and great musicality.

Conroe Crossroads is produced by Texas Music and sponsored by Visit Conroe. Find more info and get your tickets at conroecrossroads.com. 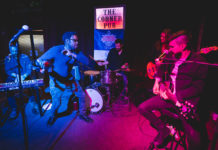 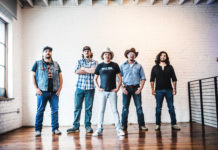 Conroe Crossroads: Mike and the Moonpies 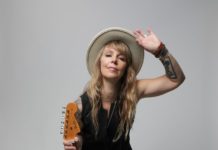