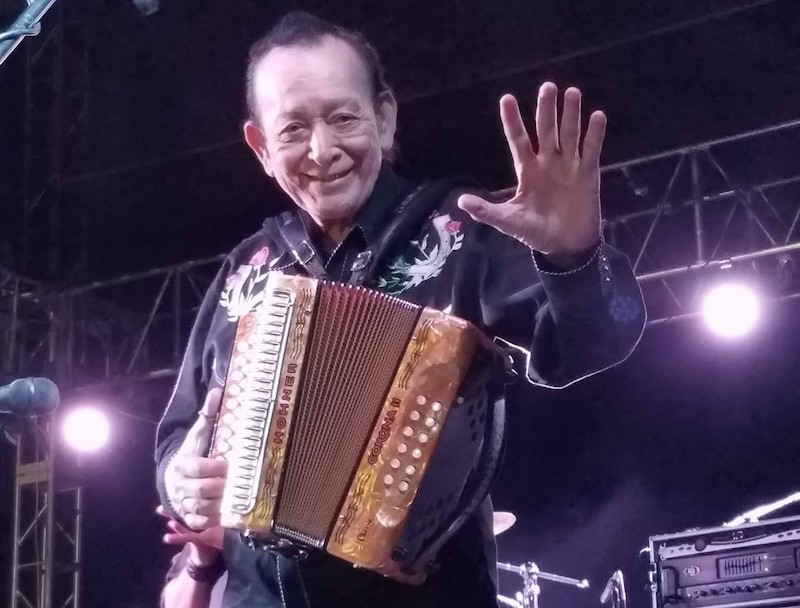 FEW, IF ANY, artists in conjunto and Tejano music have received the level of critical acclaim Flaco Jiménez has enjoyed over the course of a career that’s spanned six decades, and it’s certain no one has taken the accordion-fueled Tex-Mex sound to a larger audience than he has. Without compromising his musical vision, Jiménez has introduced the traditional conjunto sound to mainstream pop and country listeners thanks to his collaborations with the Texas Tornados, Dwight Yoakam, and the Mavericks, and he’s celebrated by adventurous rock fans through his work with Ry Cooder, Bob Dylan, Carlos Santana, Doug Sahm and the Rolling Stones.

Jiménez was born in San Antonio in 1939 and raised in a musical family. His father, Santiago, was, in fact, the original “El Flaco” (the skinny one). He was a pioneer in the late-1930s evolution of conjunto music from northern Mexican norteño folk styles into a feisty honky-tonk party form.

“Before my dad, this kind of music was mostly for dancing, and it was a lot of instrumentals,” Jiménez says. “But when he started recording, he added lyrics to the songs.” And in 1953, Santiago also began adding his young son to his sets, asking him to sit in on the bajo sexto for featured numbers.

“He let me play two or three polkas the first night, and then the guy on upright bass took an empty beer cup and walked through the crowd as they dropped in quarters, nickels and dimes until they reached to the brim. Then he gave it to me. I said, ‘Man oh man, I’m gonna keep on playing, ’cause I like this!’”

Roughly a year later, Jiménez cut his first single, a 78-rpm for Corona Records called “Alma De Texas.” In 1955, he switched from bajo sexto to accordion and gathered a group of his own, Los Caporales, cutting sides for Rio, Falcon and other small local labels.

“My father expanded the sound of conjunto,” says the slender Jiménez, who was bequeathed the “Flaco” nickname when his papa retired. “But I wanted to expand the limits of my instrument. The diatonic accordion is difficult, because unlike the keyboard accordion, it’s a different note when you push in and pull out, like a harmonica. In 1955 I began jazzing it up.”

The turning point, in 1957, was the Tipico Records single “Hasta La Vista,” an authoritative instrumental that was backed on the B-side by “Pobre Bohemio,” the fable of a poor troubadour. The energy in the music amazed listeners and even earned some local airplay. Over the next two decades, Jiménez’s determined virtuosity led to sessions with Doug Sahm and the Sir Douglas Quintet, Willie Nelson and Ry Cooder), catapulting contemporary Tex-Mex music far beyond its core Chicano following.

“I always give credit to Ry,” says Jiménez, “because he really was the one who opened the doors for me to record for a major label and expose my solo stuff.”

But it was Jiménez’s rippling, high-treble artistry that transformed his fortunes and those of younger performers he influenced. It also typified the outlook of the Texas Tornados band he formed in 1990 with Sahm, Freddy Fender and Augie Meyers. The band hit the charts with a re-cut of Meyers’ local hit “(Hey Baby) Que Paso.” A track, “Soy de San Luis,” from the band’s eponymous debut won a Grammy as Best Mexican-American Performance of 1991, the first of five Grammys Jiménez would receive before the decade was out.

The last Tornados studio album was released in 1996, but Jiménez joined up with another supergroup in 1998, Los Super Seven, a collection of top Latin-American musicians, including members of Los Lobos, as well as Joe Ely.

Since then, Jiménez has continued to maintain a busy recording and touring schedule that would tax men half his age as he upholds his status as one of the world’s leading ambassadors of Tex-Mex music. In 2015, he received the Grammy Lifetime Achievement Award, and a compilation, The Complete Arista Recordings, was released that same year. In 2017, Jiménez collaborated with Los Cenzontles and Los Texmaniacs on the studio album Carta Jugada.