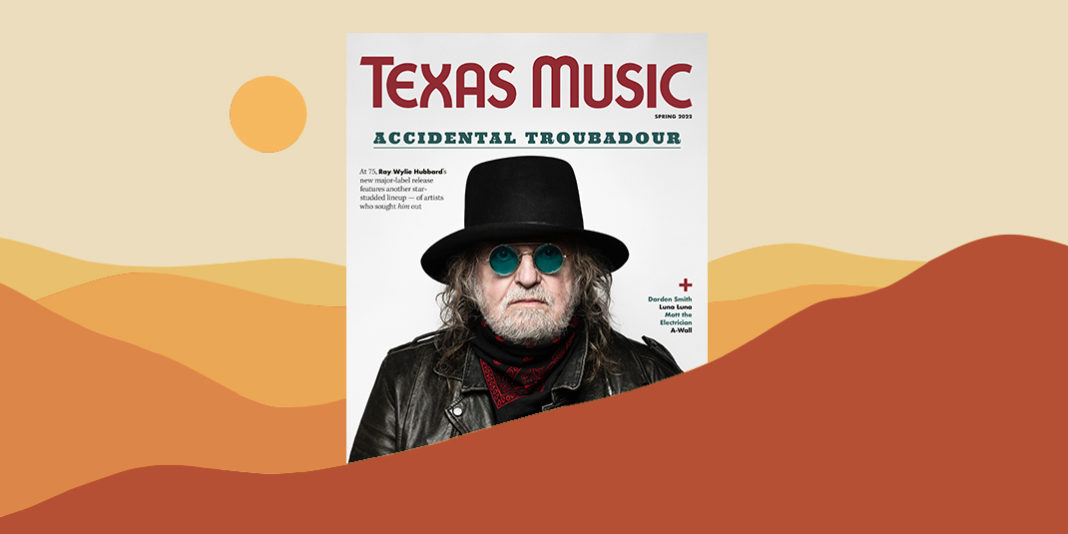 Ray Wylie Hubbard was first on Texas Music’s cover in Summer ’03. Back then, he’d emerged as one of the finest songwriters in the country, but recognition had nevertheless eluded him — except among those for whom such judgment matters: fellow songwriters. Hubbard was revered by writers of all stripes, but particularly up-and-coming artists, who nicknamed him the “Wylie Lama” for the wisdom he dispensed, often dressed in humor. He’d never won any major industry awards, wasn’t asked to play a major late-night show, and hadn’t, at that time, even appeared on Austin City Limits. (When he did finally appear, it was as a guest of one of those up-and-comers, Hayes Carll, who’d landed his own segment.)

My, how things change. Over the past two decades, Hubbard has amassed critical recognition in spades, playing Late Night with David Letterman, landing his own Austin City Limits spot, and attracting major artists like Ringo Starr, Willie Nelson, Wynonna Judd and James McMurtry, all who’ve jumped at the chance to play with him. And that’s just what happens on Hubbard’s latest album, Co-Starring Too. Geoffrey Himes provides the back story to the album and documents Hubbard’s unlikely ascension.

For our second feature, Alice Batt profiles Darden Smith, another exceptional songwriter with a national following, whose career has been marked by exceptional highs, bitter lows and a newfound appreciation for how to make meaning out of chaos. In 2012, Smith co-founded Songwriting with Soldiers, which pairs veterans with professional songwriters to provide therapeutic healing for a population most in need. And when COVID struck, Smith was at it again, co-founding Frontline Songs, allowing healthcare workers to channel their grief through songwriting. Batt traces Smith’s career and sheds light on his new ambitious release, Western Skies.

Elsewhere, Candice Harrell offers a revealing glimpse of veteran Matt the Electrician; our resident historian, Coy Prather, reflects on Monkee Mike Nesmith’s career in light of his death in December; our Spotlight features the terrific Latinx band Luna Luna; our Q&A is with Aaron Paredes (aka A-Wall), whose “Loverboy” catapulted the singer to viral fame; and we have a review of Terry Allen’s art exhibition, MemWars, on display at Austin’s Blanton Museum of Art through July.

Finally, music lovers and adventurers should mark their calendars for the latest installment of Viva Big Bend, which will be held July 27–31 in Alpine, Marfa, Marathon, Terlingua and Fort Davis. More than 50 bands will be featured. So if you haven’t yet experienced the festival, now’s your chance. And if you have, come back and enjoy!

We hope you enjoy the issue.

Out of Danger, Beauty

The Delightful Paradox of Matt the Electrician

Contrary to Ordinary: A Monkee at the End

Inside the Fall 2022 Issue of Texas Music