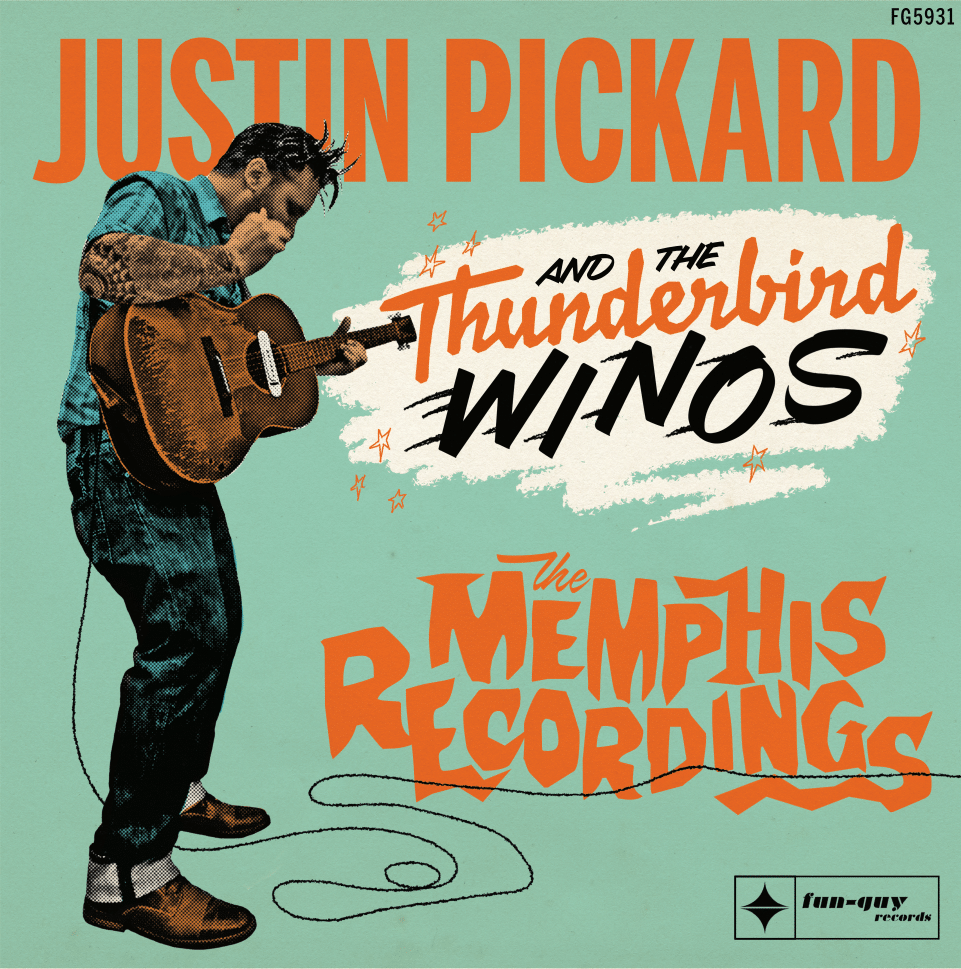 Genre is a tricky subject, especially as we get into sub-genre and regional specificities. Rock ’n’ roll, for example, could be classified as a mix of country, gospel and R&B, while Americana could be a blend of country, bluegrass, folk and any other American roots music. Definitions get blurry and can easily become intertwined. This is the hazy territory Dallas-based artist Justin Pickard occupies.

No stranger to the Texas touring life, Pickard has been playing gigs for more than 10 years. In 2020 he was named Best Americana artist by the Dallas Observer. On one level this makes sense, as his band, the Thunderbird Winos, is composed of fiddle, stand-up bass, drums and acoustic guitar. Pickard’s aim, though, seems focused on a more specific brand of American roots music: swinging ’50s rock ’n’ roll rooted in the American South — in modern terms, rockabilly.

For his third record, Pickard and his band headed to Sun Studios in Memphis. They spent two days recording in the space that captured the early sounds of Elvis, Johnny Cash, Jerry Lee Lewis, B.B. King and Roy Orbison. Besides recording in that legendary space, the recordings were mixed by Jim Heath, aka Reverend Horton Heat, a modern rockabilly pioneer in his own right. The record is even published by Heath’s Fun-guy Records. What does all this subtext and historical connotation amount to? A bare bones record that lovingly pays tribute to the origins of modern American music, while at the same time stretching its structure.

The opening track, “Exes,” starts as a classic love ballad, the isolated voice of the narrator lamenting the loss of love through death while a weeping fiddle accentuates the end of each phrase. But soon after, the song switches tempo and direction with the band bursting into a hip-shaking boogie complete with walking bass lines, chugging snare rim hits and Pickard’s speedy fingerpicked guitar lines. As the music changes, the lyrics follow suit. While the narrator might mourn the death of his former lovers, it becomes clear he’s also the cause of their deaths. He spends the rest of the song chronicling the many ways in which he did away with his exes, blending the folk tradition of murder ballads with the breakneck speed of a runaway train. The song sets the stage for the many ways Pickard and the band subvert genre expectations. They even tease Chopin’s “Funeral March” in the last few bars.

The majority of the record contains succinct and punchy tunes brimming with classic country swing. “Ginger Snap” features syncopated rhythms with call-and-response backing vocals, full of sugary food analogies for a redheaded beauty, while “Right Here” is another original love song that moves with strutting Chuck Berry-brand blues and some great interplay between the fiddle and lead guitar. Pickard also includes two covers from the Sun Studio legacy, “Mystery Train” by Elvis Presley and “Mean Little Mama” by Roy Orbison. Both are true to the originals, with Pickard pushing his voice into a higher register to emulate the distinct vocal stylings of both icons.

Perhaps the most interesting pieces here are the two originals at the tail end of the record. “Backwards Devil” is a mid-tempo rocker in a minor key that finds Pickard as a modern revivalist searching for salvation while looking towards the past.“The city streets don’t talk, so I don’t know for sure,” he sings, “but I swear that Jesus walked in Memphis back in 1954.” Before the song is finished, Pickard counts off the band and ramps up the tempo, switching to a galloping Western burner blazing toward the sunset with reckless abandon.

“To Hell With the Wagon” employs a similar trick. Starting as a southern gothic waltz with sparse guitar and swelling fiddle parts, its religious imagery paints a portrait of pioneers lost out on the trail fearing the wrath of the devil. But again it changes dynamics, speeding up like a wagon train gone off the rails, with Pickard playing the part of a mad reverend promising safe passage westward to God’s glory.

Delivered in a tight package from a group that understands not only the roots of rock ’n’ roll but the many branches that have grown out from it, Justin Pickard and the Thunderbird Winos are clearly a road-tested group of musicians with a common musical language of their own.