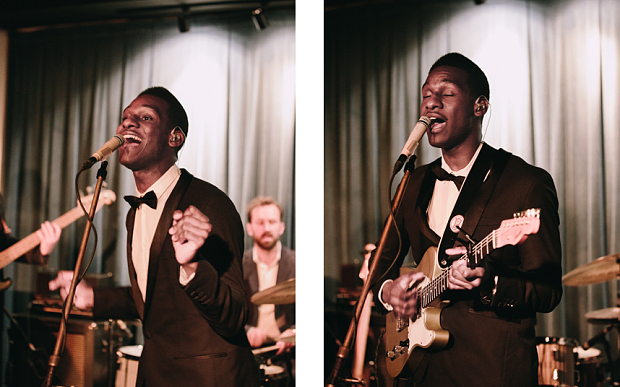 LEON BRIDGES’ swift rise to fame is the stuff rock star dreams are made of. The 29-year-old went from washing dishes at Del Frisco’s in Fort Worth to signing a deal with a major record label in a matter of months. Coming Home, his debut, cracked the top 10 on the Billboard album chart, and suddenly  Bridges was the poster boy for a soul revival.

Bridges’ music pays the sincerest respect to the songs of the ’50s and ’60s that inspired it. Coming Home was recorded in a makeshift Fort Worth studio using period equipment and local musicians. No instrument was allowed to be fewer than 50 years old. His appearance offered further tribute: he wore vintage suits, starched-collared shirts tucked neatly into high-waist trousers and natty loafers, with a razor-sharp parting.

Two members of Austin psych-rock band White Denim, Austin Jenkins and Josh Block, agreed to produce the album after hearing Bridges’ set at the Magnolia Motor Lounge in Fort Worth. “The cool and quite rare thing was we had the record done before I signed any record deal,” Bridges says. “And Columbia, who I signed with, didn’t ask for any changes. There were no producers brought in to do extra work on the album. There were no stylists for me to be sent off to. People think the way I dress is part of some Columbia marketing scheme. I understand where they’re coming from, but it pisses me off. You can see from my Instagram before I was signed that it’s the same guy.”

Unadorned sonic beauty gave Coming Home its power, from the vintage arrangements and lyrics to Bridges’ pristine tenor. But some critics faulted him for looking backward instead of forward, for creating a satin-wrapped time warp that ignored the era’s social turbulence. Bridges’ comfort in the past created discomfort for some, who decried his interpretation of soul music as too conservative and too retro. Where was its political message?

“As a black man, I’m held to a different standard than a white guy making the same kind of music,” he explained, “and I don’t like pressure. If I’m going to make political music, I should do it because I feel deeply about whatever situation is going on. I shouldn’t do it because Kendrick Lamar is doing it. I’m just going to make music I dig.”

This year, Bridges won his first Grammy, taking home the honors at this year’s ceremony for Best Traditional R&B Performance (for his song “Bet Ain’t Worth the Hand”). Both of his albums — Coming Home and the follow-up, 2018’s Good Thing — have been nominated for Best R&B Album at the Grammys, and both have been top-10 hits on the Billboard charts. His single “River” appeared on the soundtrack for HBO’s Big Little Lies, going viral and earning another Grammy nod for Best Music Video.

He’s appeared on Saturday Night Live and Sesame Street, and made his Hollywood debut with a cameo in the Neil Armstrong movie First Man. He also visited the White House after President Barack Obama included Bridges on his 2016 Summer Playlist.

Bridges has circled the globe on multiple world tours, but he always comes back to Fort Worth. Unlike most musicians of his stature, he hasn’t decamped his hometown in favor of the bright lights of Los Angeles or New York. He still lives here in the city where it all began. “It’s such a pride to be from Fort Worth,” he says. “I can come here and be normal. I can go to a dive bar on a Monday night, and there are two people in there. Keeps me grounded.”