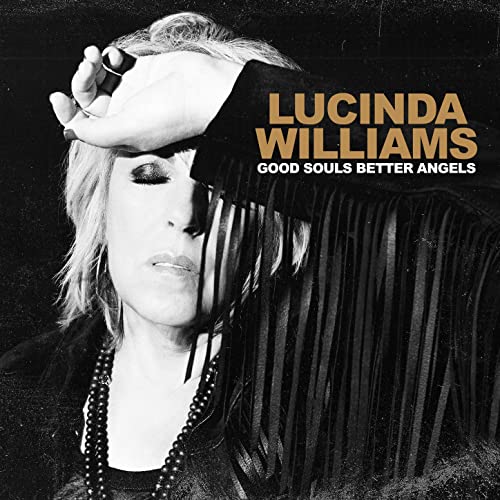 Admittedly, this won’t ever be the go-to Lucinda Williams album to prove her bona fides as one of the best American songwriters of the last half century; for that, there’s no beating the one conveniently titled Lucinda Williams. And as long as we’re being forthright here, song for song her finest hour of the last decade remains 2011’s Blessed. But don’t misconstrue any of that as a knock against Williams’ latest, because Good Souls Better Angels merits its own badge of distinction: Spoiling for a fight, and rough and rowdy in ways Bob Dylan’s own duly lauded 2020 offering only teased at, this is the Lucinda record to go to when you just really want to hear the woman — backed by her pummeling power trio, Buick 6 — flat-out rock.

Mind, this is not uncharted territory for Williams. She’s had an edge about her going all the way back to her salad days on the Texas folk scene in the ’70s, her slurred Louisiana drawl peppered with grit even when she objectively sang “pretty.” And the more her voice has calcified over time, the more she’s leaned into it, Tom Waits style — albeit sometimes straying into a croaky red zone and running roughshod over her best melodic interests. But on Good Souls, she commands that instrument, harnessing its ragged glory into a full-throated, primal roar that packs a satisfying, brass-knuckled heft to every line she sings.

There’s a tight thematic focus at work here, too, established right from the opening stomp of the Memphis Minnie adaptation “You Can’t Rule Me”: “Yeah man I’ve got a right / To talk about what I see / Way too much is going wrong / It’s right in front of me.” The bruising “Bad News Blues” sets the scene of a world gone wrong, a la Dylan’s “Everything is Broken,” and the last president is the unnamed but obvious target of the seething “Man Without a Soul.” But there’s more meat on Williams’ “Bone of Contention” here than just righteous liberal fury. “Wakin’ Up” lashes back at an abusive lover like a cornered animal done taking it, while “Big Black Train” and the sizzling “Pray the Devil Back to Hell” wrestle more internal demons like depression, shame and doubt. Tellingly, those are the confrontations where Williams doesn’t always sound quite so self-assured, but that vulnerability — coupled with the empathy, compassion and even a cautious measure of hope that comes through in fits and starts on the back end — only deepens the record’s overall impact.

In the closing “Good Souls,” she calls on the hands of saints and “better angels” to help keep her strong, fearless and righteous in the face of despair. But after hearing her summon, at age 67, the most ferocious performances of her 41-year recording career, rest assured this is one battle-hardened survivor who can more than fend for herself until the cavalry arrives.