THE NUMBERS add up — and multiply — for Lyle Lovett, the Texas-bred troubadour who’s as adept in horse-riding competitions and motocross races as he is in singing, writing songs and leading his 14-piece Large Band in concert.

He’s performed multiple times at the White House. He’s made multiple albums and won multiple Grammys. He’s sold out venues coast to coast — and beyond — by himself, with cellist John Hagen, with his Large Band, with buddy Robert Earl Keen, and as part of a quartet of legendary songwriters that included Guy Clark, Joe Ely and John Haitt. He’s been featured in multiple films and TV series, including Mad About You, Walk Hard: The Dewey Cox Story, Castle and the Robert Altman-directed The Player.

And when the debut issue of Texas Music appeared in 2000, there was Lovett on the cover. 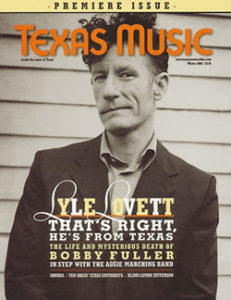 So what keeps him going more than three decades after he released his self-titled debut? “I enjoy playing music as much as I ever have,” he says. “And the key to it all is getting to work with such talented people all the time. It’s like getting together with family.”

The core lineup of the Large Band has remained fairly constant, with a member or two rotating in and out periodically, depending on their availability. “I do change up some of the arrangements,” Lovett says, “depending on who’s in the band. My objective is, at the end of the show, I want the audience to feel like they’ve gotten to know everybody in the band. And it’s really fun for me to stand in the middle of the stage.”

Lovett’s 13th and most recent album, the wryly titled Release Me, came out way back in 2012. Now, armed with a new contract with Verve Records, he hopes to record a new album in November. His upcoming concerts may include a few previews of songs from the new album.

“My hope on this next record is that I can represent the different facets of the kinds of songs I’ve done over the years,” says Lovett, whose music is, by turns, earthy, elegant, sly, introspective, uplifting, steeped in tradition and — on occasion — at least mildly subversive.

A graduate of Texas A&M, Lovett majored in journalism and German. He credits his time on the staff of the university’s newspaper, the Battalion, for helping him hone the descriptive writing skills and keen eye for observation that would later become hallmarks of his vivid songs.

While at the Battalion, he also got to interview Nanci Griffith and Willis Alan Ramsey. And his lone review was of a Ramsey concert — where Lovett himself was the opening act. “I wrote very kindly of myself,” he jokes.

He grows more serious. “To have a career that turns into your whole life — and now I’m 61 — you can’t believe how amazing it is.

“I don’t think I have any better perspective on it now than I did at the beginning. But I’m most grateful that people show up and that this is my life.”

And has he given any thought to how he’d like to be remembered?