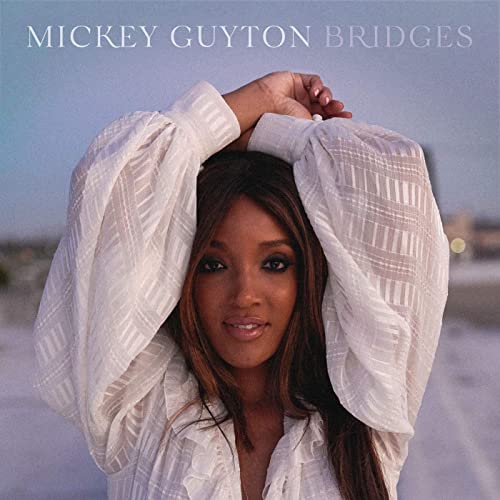 Mickey Guyton has had a recording contract with Universal Music Group for more than 10 years, which was signed on the spot in Universal chairman Mike Dungan’s office after an a capella performance of a Patty Loveless song. So the elephant in the room is why it’s taken Guyton so long to make an impact in country. Theories abound, of course, often focused on race and gender, but Guyton addresses the issue head-on: “I was driving with my husband, asking why country wasn’t working for me, and he said it: ‘You’re running away from everything that makes you different, that makes you you.’” One listen to Bridges is enough to make you want to thank that man in person, if, in fact, he was the catalyst that set her upon the path to making this powerful, melodic and utterly compelling EP.

Bridges is everything good country music should be — open, honest, painful to listen to in places and yet uplifting, joyous and hopeful, too. Guyton’s storytelling and brutal, no-nonsense approach to social issues are refreshing in a genre still tainted by the Dixie Chicks’ (as they were called back then) “shut up and sing” controversy. Sure, there will be listeners who won’t be able to deal with her airing of some painful truths, but, to borrow a time-worn truth, Guyton and her fan base will be on the right side of history.

Tracks like “Heaven Down Here” and “Bridges” deal directly with the state of the union as it is and the fractured, divisive way we live our lives. The former, a conversation with God about how difficult life is on Earth, features a huge chorus and a powerful final third that showcases Guyton’s vocal prowess and the skillful, slick production and soulful approach, perfectly balancing melody and meaning. The title track, meanwhile, talks of divides, of fires in the streets, Bibles and tears but is ultimately a plea for unity. The original structure of the song and its powerful vocals are somewhere in that wonderful hinterland where Aretha meets Dolly. There are soul/gospel overtones at play as Guyton sings, “We gotta take these stones we’ve been throwing / We gotta lay them down.”

But there are playful moments as well, like “Salt,” with its sultry vocals and radio-friendly melody, something akin to what Trisha or Shania might have recorded back in their ’90s heyday. “Her kinda trouble should come with a warning,” Guyton sings. “You think you’re getting sugar, but you’re getting salt.” And therein lies the problem with Guyton — and it’s a good problem to have. Does her label promote her as an artist with a social conscience, breaking down taboos and giving a voice to the marginalized and disenfranchised, or do they push the “Salt” side of this talented and chameleon-like artist? Given the success of her Grammy-nominated single, “Black Like Me,” that question may have already been answered.