The Arlington-born artist, known for songs such as “Better Than You Left Me” and “Black Like Me,” made history last year as the first Black female performer to receive a Grammy nomination for a solo country honor. 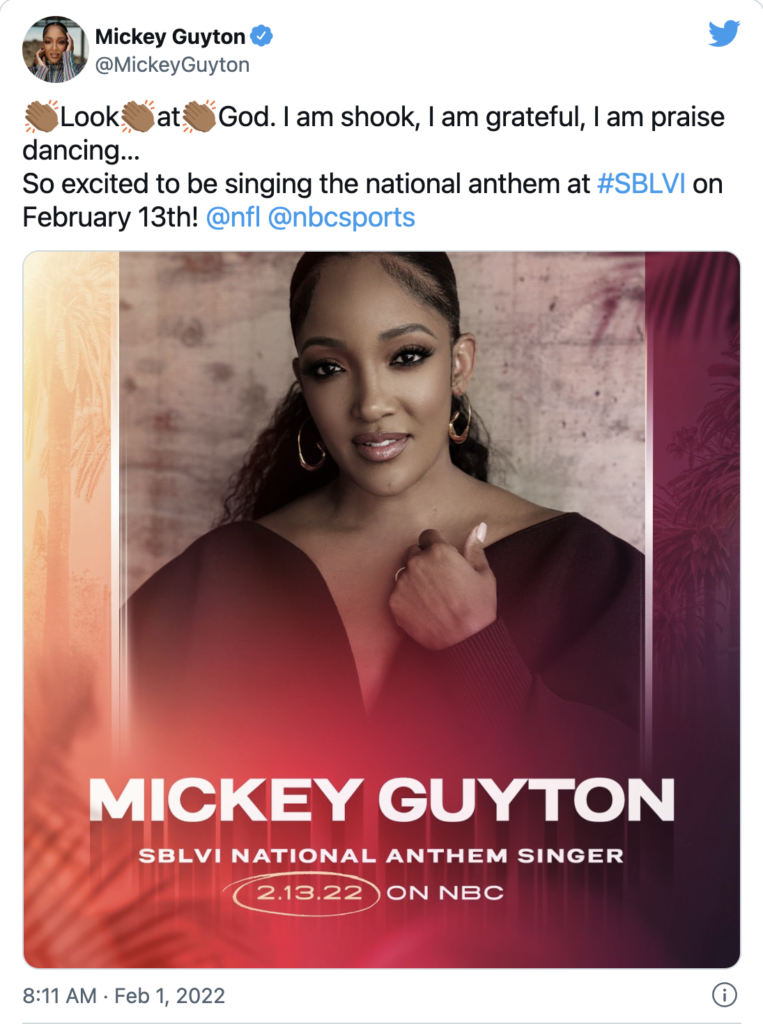 Guyton wrote in an Instagram post Feb. 1 that she’s “so excited” for her Super Bowl performance. “Look at God,” Guyton, 38, wrote. “I am shook, I am grateful, I am praise dancing.” Previous national anthem performers at the Super Bowl include Beyoncé, Aretha Franklin and Diana Ross.

Guyton has said that watching LeAnn Rimes — who was raised in Garland, Texas — perform “The Star-Spangled Banner” before a Texas Rangers game was a significant inspiration behind her own decision to pursue country music.

Last year, Guyton released her debut, Remember Her Name, which came out a decade after she signed a major label deal in Nashville. “I hope I can just show everyone, no matter their age, or sexual orientation, or if they’re a mother, that you can 100 percent do it, Guyton said. “It’s so easy to write off our dreams, but you have to fight for them.”

The NFL also announced that R&B artist Jhene Aiko will sing “America the Beautiful,” and that the gospel duo Mary Mary will perform “Lift Every Voice and Sing.”

“We’re so excited to represent INGLEWOOD at #SBLVI with our performance of ‘Lift Every Voice and Sing,’” Mary Mary, which features sisters Erica Campbell and Trecina Atkins-Campbell, wrote on Instagram. “Tune in. You won’t want to miss it!”

This year’s Super Bowl will be the first in Los Angeles since 1993, and the first ever at SoFi Stadium, which opened in 2020.

The Los Angeles Rams will take on the Cincinnati Bengals.