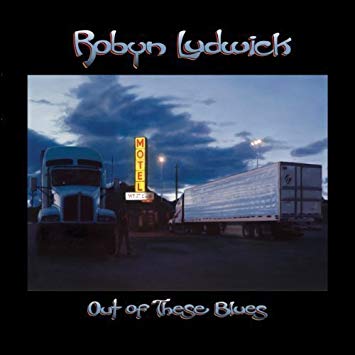 With her third release, Robyn Ludwick established herself as a serious contender in the world of classic female singers such as Emmylou Harris and Lucinda Williams. The sister of Texas troubadours Bruce and Charlie Robison, she grew up in Lone Star dancehalls and cut her teeth working in Austin’s music scene.

Tom Betts’ cover painting of trucks and a motel seeped in dusky blue shadow mirrored the tone of Out of These Blues. The 12 tracks featured a cast of lovers and losers making their way in a hard world. Ludwick’s lived-in voice struck the right balance between desperation and fragile hope, which made a cut like “New Orleans,” for instance, so moving. The shadow of Lucinda Williams’ dark drawl loomed large, as well as Steve Earle’s. Guitarist Gurf Morlix put his meaty stamp on the unhurried production, and veteran Hammond whiz Ian McLagan, formerly of the Faces, provided the kind of moody fills that lift the heart. Amid them, Ludwick stood tall: songs such as the unsettling “Fight Song” and the mountain anthem “Hillbilly” revealed a writer of substance.

Ludwick received a civil engineering degree from the University of Texas before a set of intense life changes woke her sleeping songwriter at age 30. She dove headlong into her craft, taking on a music career she feared would be overshadowed by the wealth of family talent that came before her. But in time, Ludwick’s songwriting came to the forefront, with cuts appearing on releases by brothers Charlie and Bruce, and by sister-in-law Kelly Willis.

Out of These Blues received numerous accolades, including Top 10 album honors from Texas Music, Austin City Limits, No Depression and 93.3 KGSR and was named Album of the Year by the Texas Music Scene. She’s continued to dedicate herself to her music, and recently purchased, along with her husband, John Ludwick, the Devil’s Backbone Tavern in Fischer, Texas, where she’s been known to throw down a set with her band.