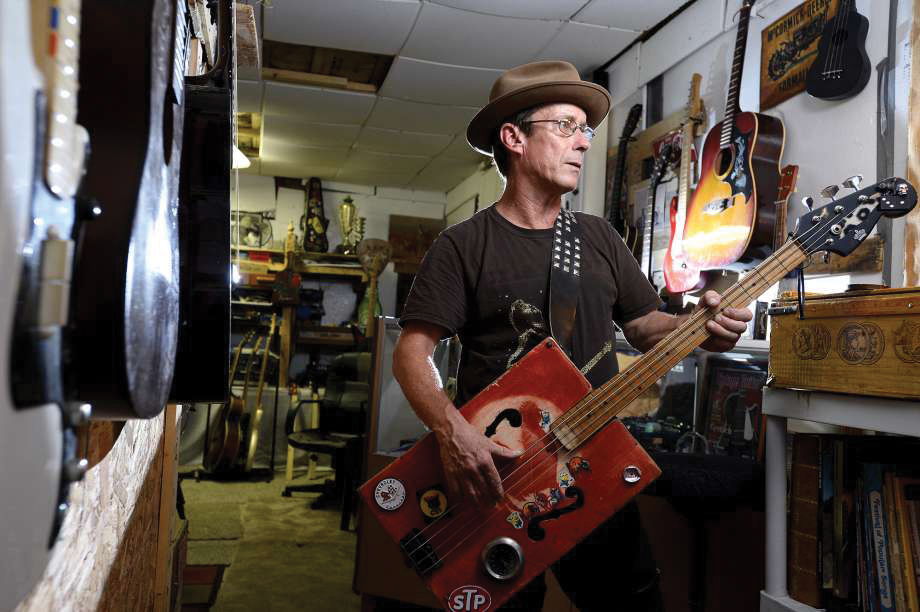 BEYOND THE DOOR of an unassuming shed at his Port Neches home lies his “guitarium,” where Donnie Badgett spends his time tinkering to draw tunes out of rusty cans, license plates and dog bowls.

“I can’t hardly look at anything without seeing guitars,” Badgett says.

He began making instruments four years ago to pass the time and put his mind to work. “I decided to turn the TV off,” he says. “I was becoming a couch potato.”

He finds most of the materials for his homemade instruments in trash piles on the side of the road. Even the glass display cases in the guitarium were bound for a landfill before he plucked them from the curb.

“It seems like everything I want,” he says, “I find on the side of the road.”

Badgett says most of his guitars are built to be art pieces, but he can coax a unique bluesy tone out of them as his plucks the strings and shimmies a glass slide along the neck.

He’s trying to work on improving the sound of them and has stencils he uses to replicate the fret spacing of a common guitar, which he drafts onto the yardsticks he uses for the neck.

He started cutting guitar shapes from scrap sheet metal while working as a welder and then taking them home to paint as wall hangings.

He’s played guitar since he was 12 and estimates he’s owned 120 different guitars during the past 44 years. Badgett has made 58 homemade guitars and displayed them at local businesses like Neches Brewing Co., BAW Resale and Interiors and the Music Studio in downtown Beaumont.

He hopes to make a career selling his creations. After a lifetime of work in construction and welding, the hard labor has caught up to his body, he says.