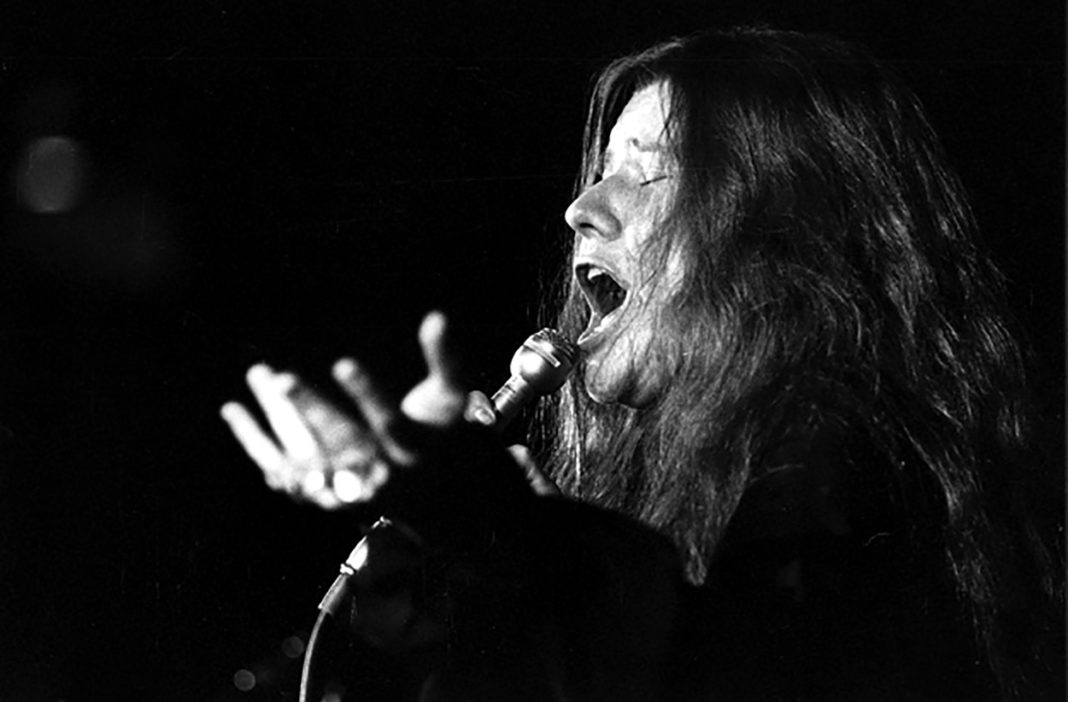 Janis Joplin was the biggest female star in the history of rock ’n’ roll when she died, according to Rolling Stone. Her role models were Otis Redding and Bessie Smith, and she belted out a raw, raspy, exuberant blues that no one expected from a white girl from Port Arthur, Texas. She decked herself out in outlandish psychedelic beads, bangles and feathers, with oversized sunglasses tucked into unruly hair. On stage, she was all energy and intensity and sexuality, but there was vulnerability mixed in. The sweat flew from her face when she sang.

Joplin was only 27 when she was found dead in her motel room Oct. 4, 1970. She didn’t die because of the turbulent times or the zeitgeist or because the 1960s had given way to the 1970s; she died because she drank too much and did too many drugs and, for all her bravado, was deeply self-destructive. 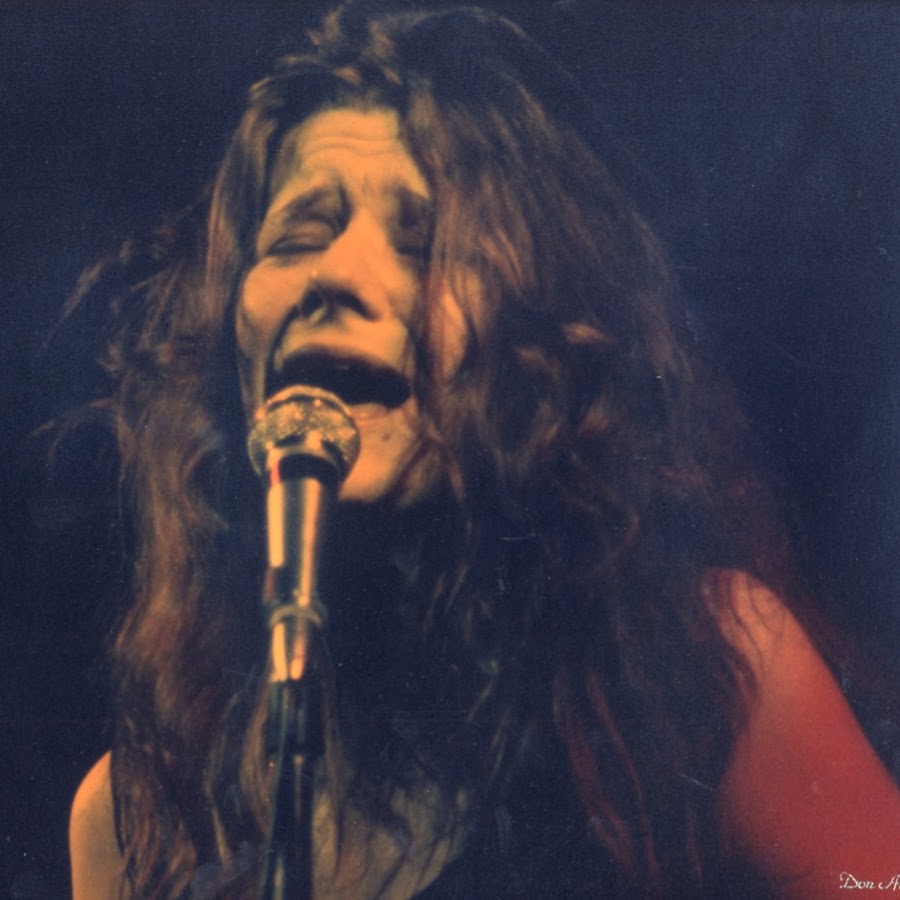 “Sure, I could take better care of myself,” she said. “I could eat nothing but organic foods, get eight hours of sleep every night, stop smoking. Things like that. Maybe it would add a couple of years to my life. But what the hell.” In another interview, she added, “Maybe I won’t last as long as other singers, but I think you can destroy your now worrying about tomorrow.”

There was something poignant in the contrast between her life-is-cheap attitude (symbolized by the trademark bottle of Southern Comfort she carried on stage) and her bookish good-girl interior. She so desperately wanted to please her parents. This came through in her letters home even as she was becoming a superstar. “I apologize for just being so plain bad in the family,” she wrote. “I realize that my shifting values don’t make me very reliable and I’m a disappointment, and, well, I’m just sorry.”

In the months before she died she paid for a tombstone to be built at the unmarked grave in Philadelphia of Bessie Smith. She went back to Port Arthur for her 10th reunion at the high school where she’d felt ostracized in her teens. She went on the Dick Cavett Show, where she described herself as an “F. Scott Fitzgerald freak.” She contained multitudes, obviously. But in her final days, she was back on the heroin that ultimately killed her.

Today so much time has passed that her contemporaries are beginning to die of natural causes. And rock ’n’ roll has changed. Concert promoter Bill Graham, describing the commercialization of the industry, once noted, “Do you realize that if Woodstock took place now, Southern Comfort would pay Janis a million dollars for just holding that bottle?”

Joplin left behind a legacy that included stints as the lead singer of Big Brother and the Holding Company and two solo albums. We take a look back at her life and musical career. 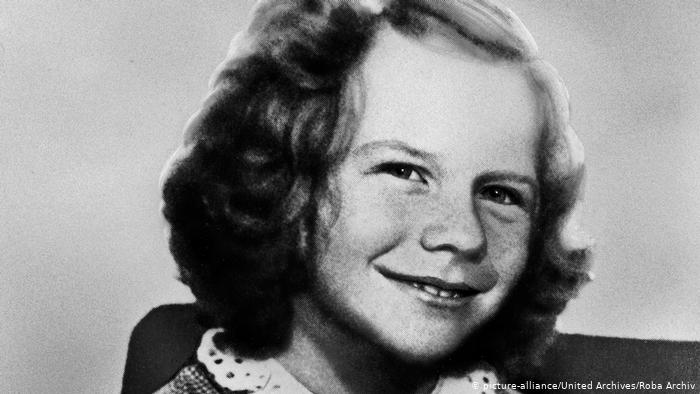 Born on Jan. 19, 1943, Joplin grew up in Port Arthur. Culturally conservative and bourgeois, the mid-sized oil refinery city was a protected environment for Janis and her younger brother and sister. She wrote poems, painted and sang in the local church choir. She was a good student and fairly popular until high school, when she began to rebel and dress differently than the other girls. 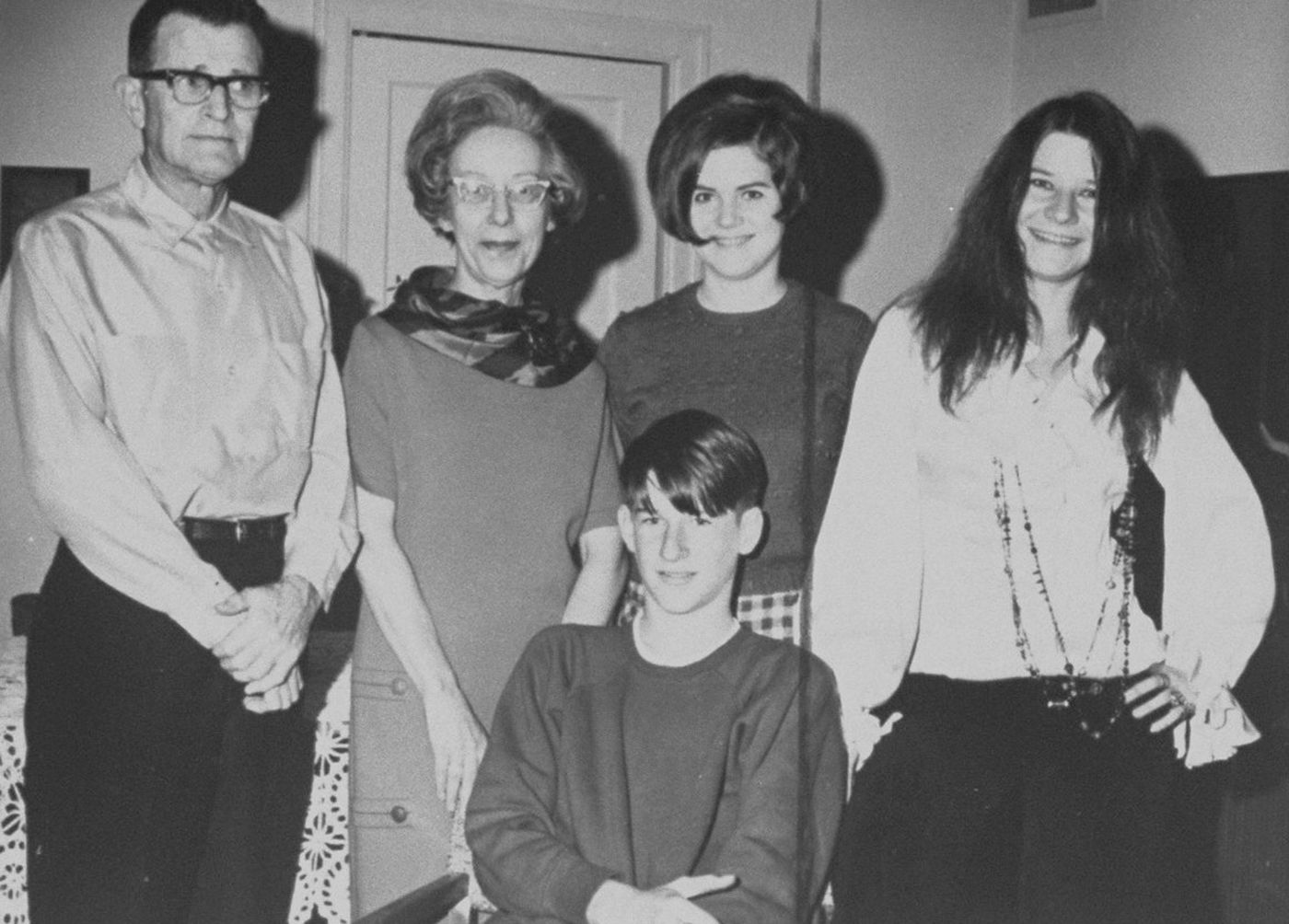 Janis (at right) was the only child until her sister Lauren was born when she was 6. Four years later, Janis was made a sibling yet again when brother Michael was born. Joplin and her family are pictured here around Christmas in an unknown year. 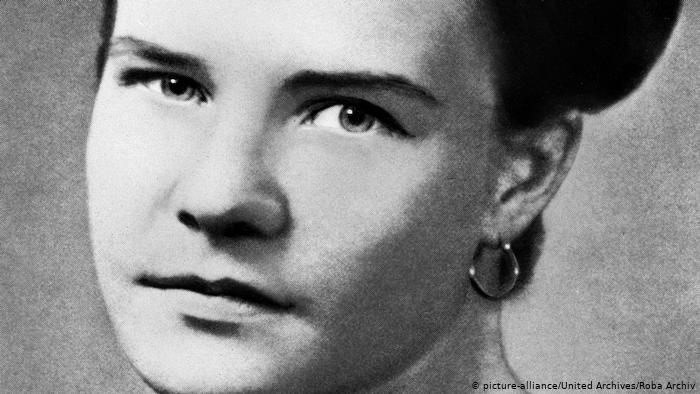 Gaining weight, battling acne and teased by her classmates, Joplin stayed by herself and neglected school. Feeling she didn’t belong, she began to demonstrate it by wearing men’s clothes. Finding consolation and meaning in art and music, she discovered the blues and made music with a few friends. After high school, she trained as a secretary and enrolled in college twice but dropped out. 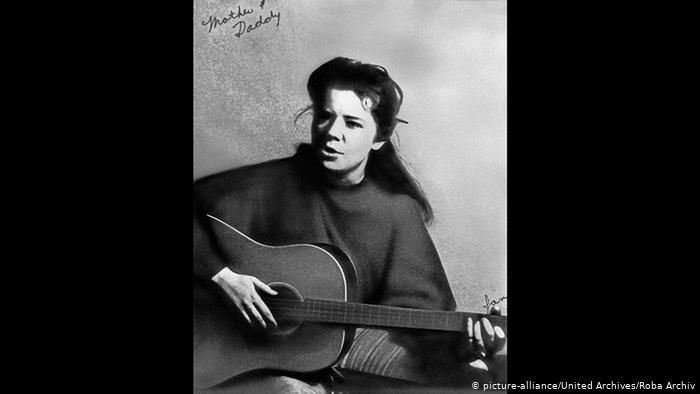 This picture from the family album shows Joplin playing and singing folk songs. She gave her first public performance in Texas — at an alcohol and drug rehabilitation center, of all places. In the summer of 1961, when she was only 18, she moved to Los Angeles to become a singer. 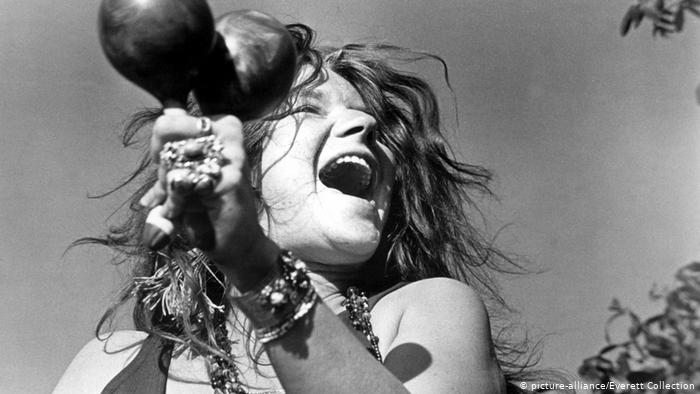 Alcohol and drugs were the accompaniment to her singing career from the beginning. She sang in clubs and made recordings with Jorma Kaukonen, the guitarist in Jefferson Airplane. It was a shaky start to a career in music, however. Usually drunk, stoned or both, she was called “Speed Freak.” She returned to Texas after a couple of years. 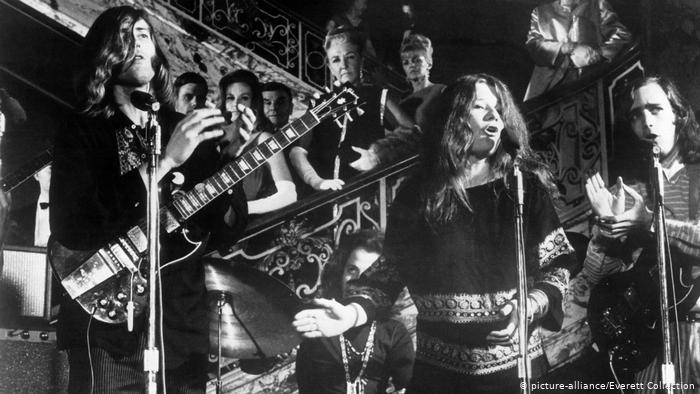 After a short stay in Texas, it was back to San Francisco. Settling in the hippie district of Haight Ahsbury, she joined forces with Big Brother and the Holding Company, a blues band. With them, Joplin developed her unique hoarse and soulful singing style. 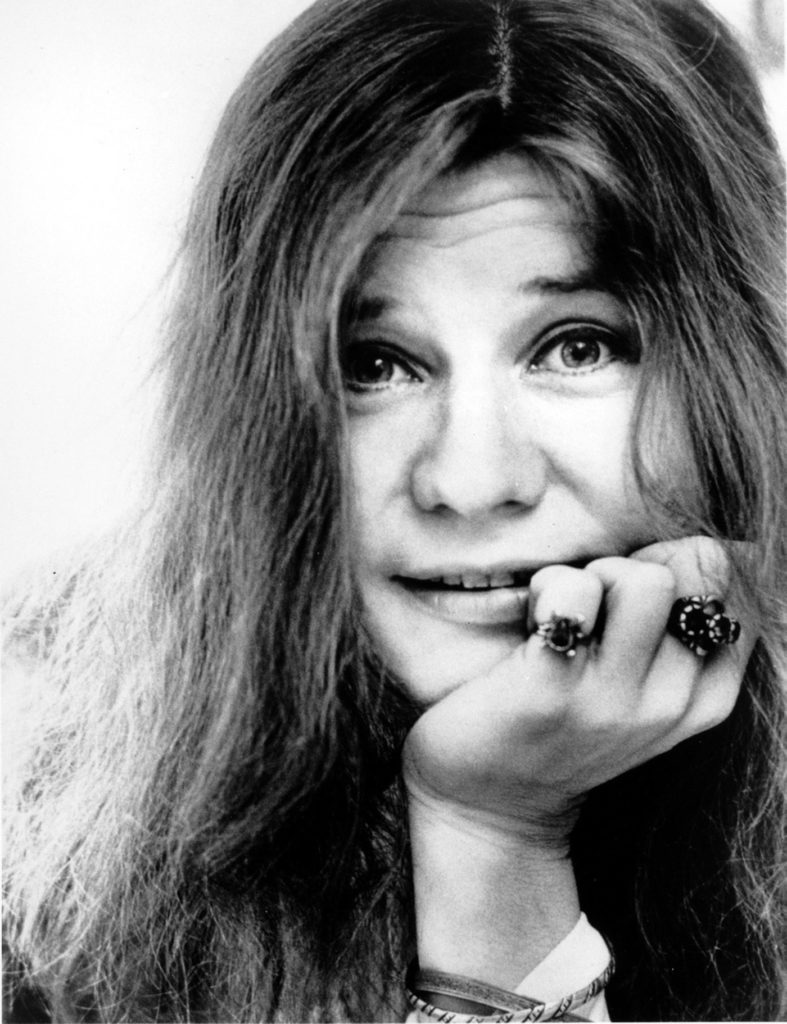 As Big Brother developed a following in the Bay Area, Joplin went from singing a few songs and playing tambourine to being lead singer. The band made their first major performance at the Monterey Pop Festival in 1967 — performers included Jimi Hendrix and the Rolling Stones — where they performed a cover of the hit song “Ball and Chain.” It was mostly Joplin’s voice that audiences loved since it was raw because of the drugs and alcohol she’d consume during performances. 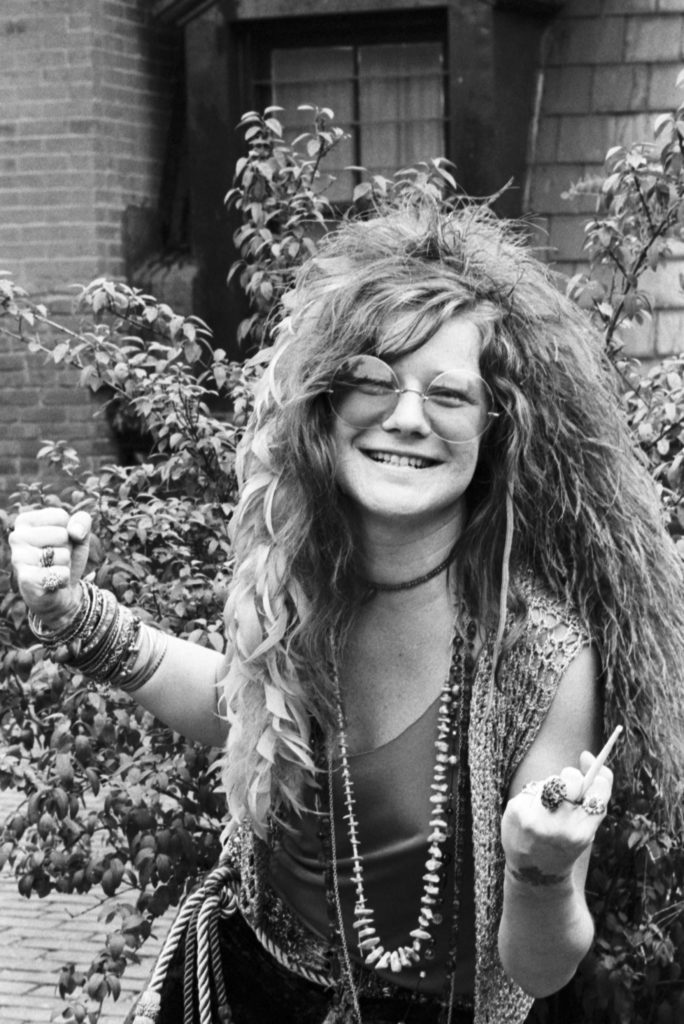 After the band’s success at Monterey, they signed a major contract with Columbia Records. Their first album, Cheap Thrills, was released in 1968 and was an international success. The album was certified gold as hits like “Piece of My Heart” and “Summertime” would quickly become standards. However, feeling like she was being held back professionally, Joplin made the hard decision to leave the band and start a solo career soon after. 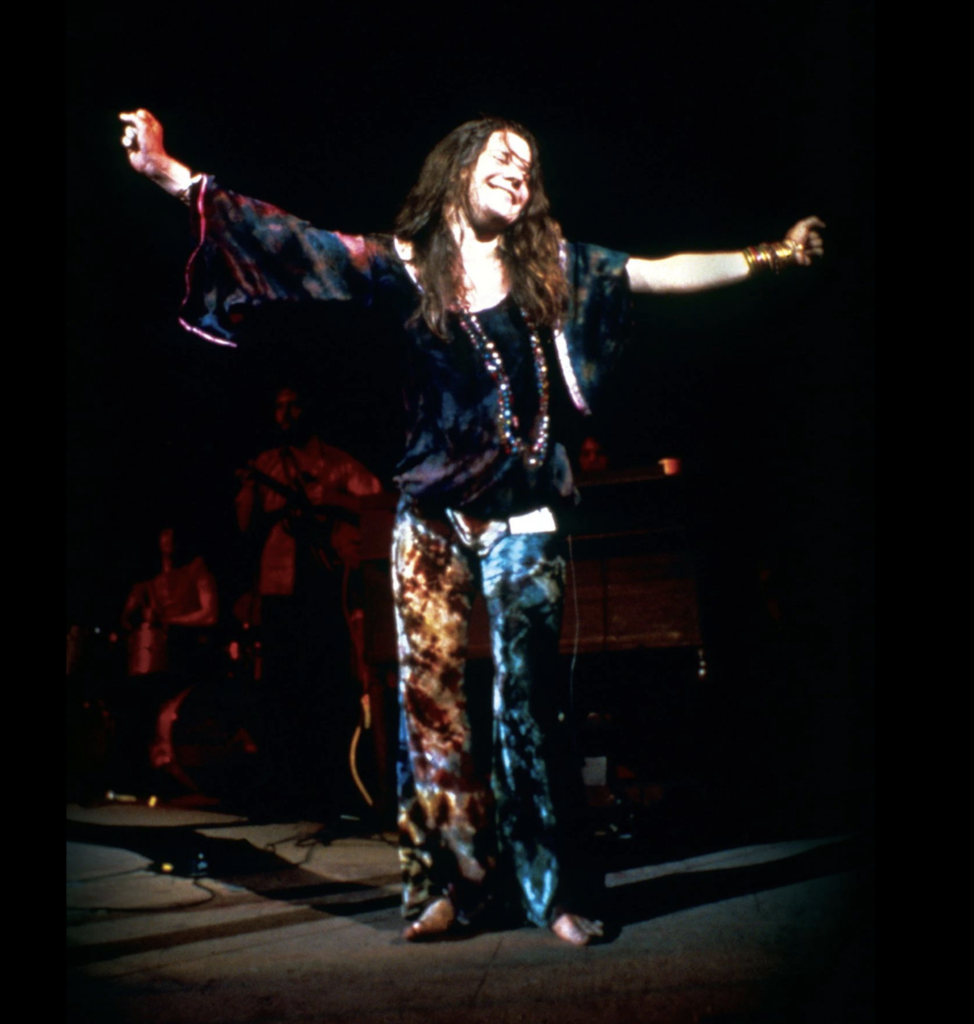 After leaving Big Brother in December 1968, Joplin made her first historic solo performance at Woodstock in August 1969. A month later, Joplin released her first solo album, I Got Dem Ol’ Kozmic Blues Again Mama! Some of her most popular songs from the project were “Try (Just a Little Bit Harder)” and “To Love Somebody,” a Bee Gees cover. The album, however, got mixed reviews as Joplin quickly began feeling the pressure to prove herself in a male-dominated industry. 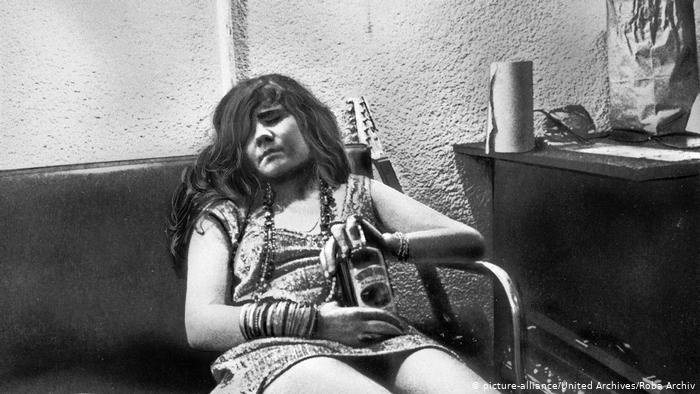 If the party was over and no one was available for the night, she could always rely on Southern Comfort. One writer referred to Joplin as the loneliest person in the world. 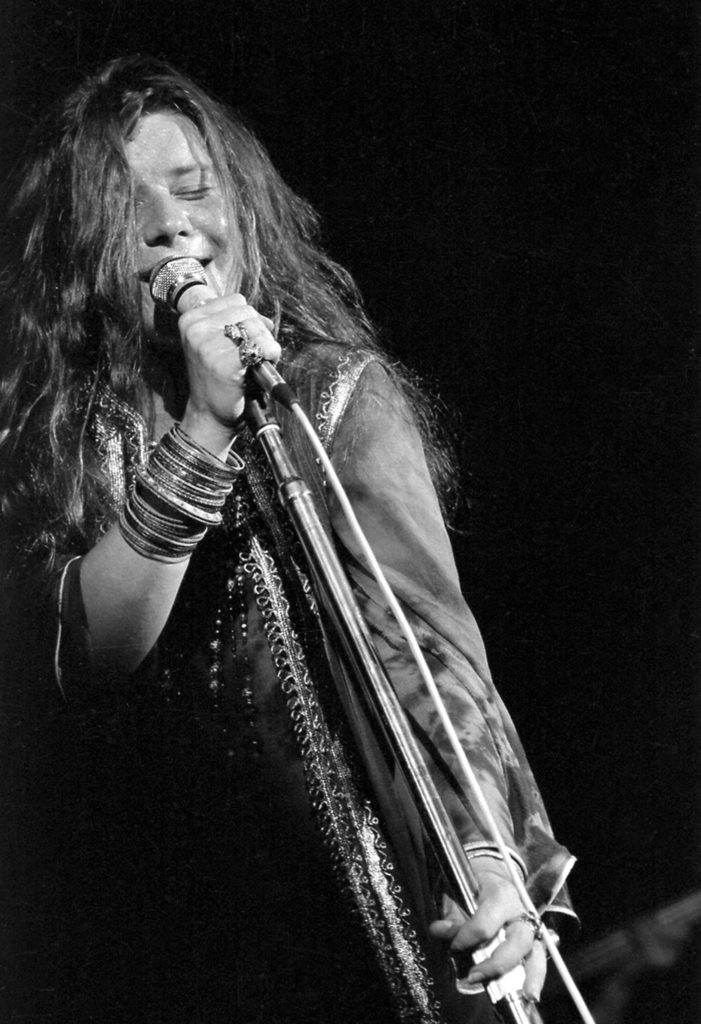 Despite continuing to make a name for herself, Joplin struggled to stay afloat in the music industry and, as a result, turned increasingly to alcohol and drugs for comfort. Regardless of criticism, she continued her career and began recording yet another solo album. Two months before her death, Joplin went on tour with Full Tilt Boogie in what was called the All-Star Festival Express Train Tour through Canada. Joplin performed alongside big names like the Grateful Dead, Eric Andersen and Buddy Guy. 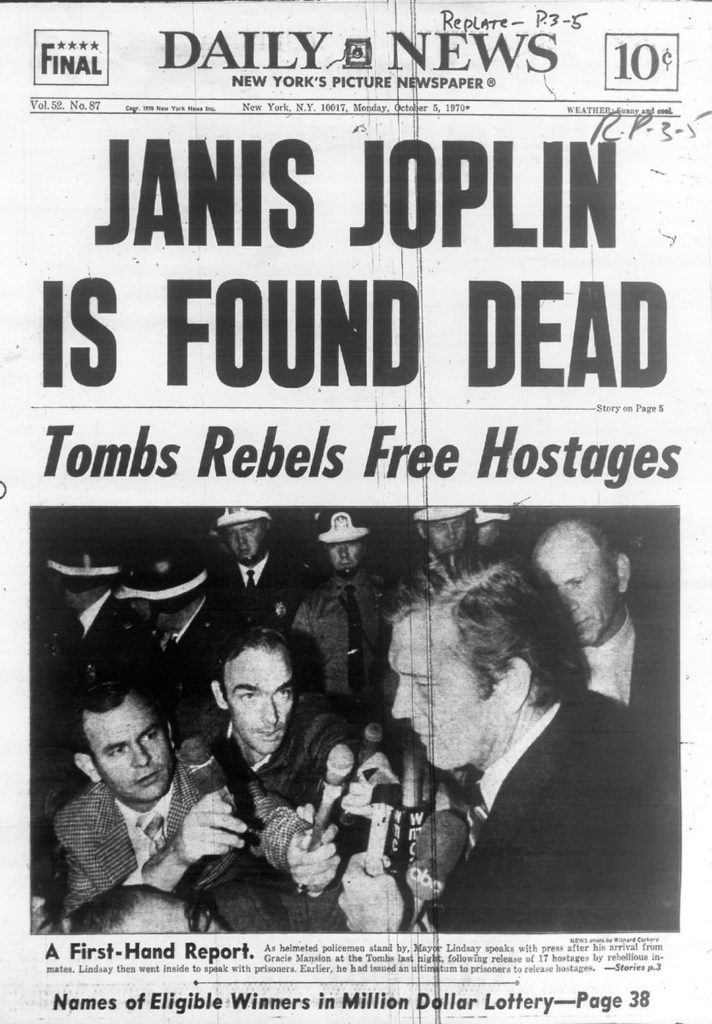 On Oct. 4, 1970, Joplin was found unconscious in her Hollywood hotel and rushed to the hospital where she was pronounced dead. It was later discovered she died of a heroin overdose. Blues singer Eric Burdon of the Animals offered a different interpretation: “The queen of the blues didn’t die of an overdose of heroin, but of an overdose of Janis.” Her final album, Pearl, was released posthumously and became the bestselling album of her career. The single “Me and Bobby McGee” topped the charts for weeks. 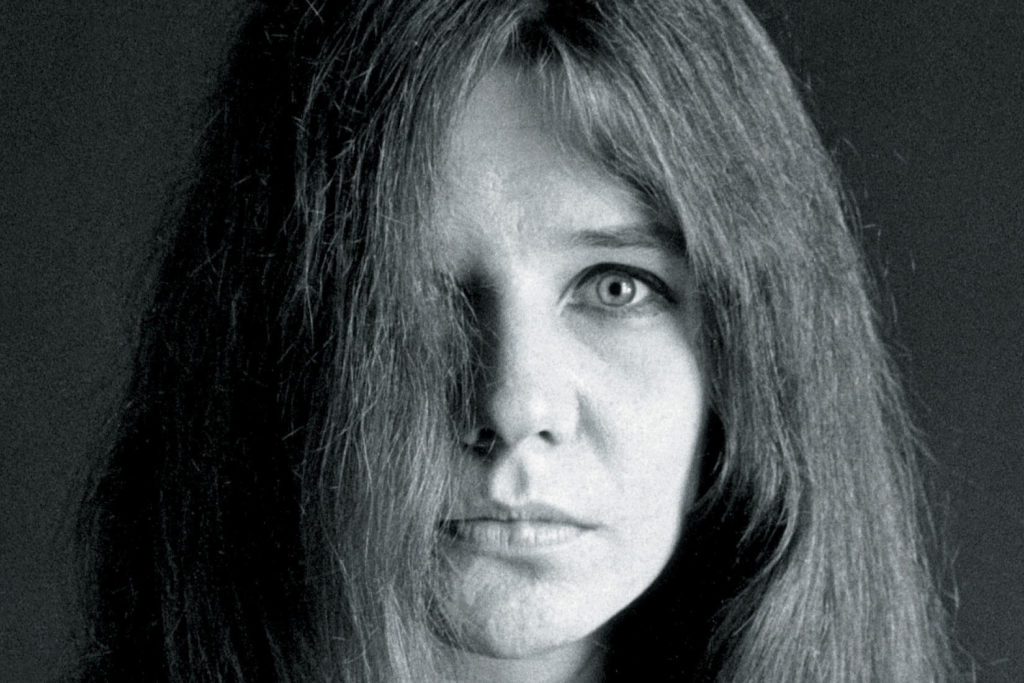 Only days before her death, Joplin had signed her will, including a large sum for her wake at Lion’s Share in San Anselmo, California. Sent to 200 guests, the invitations were printed with the message “Drinks are on Pearl.”

Joplin’s legacy still lives on as she was posthumously inducted into the Rock and Roll Hall of Fame — where a special exhibit is now dedicated to her — in 1995 and honored with a Recording Academy Lifetime Achievement Award at the 2005 Grammy Awards. More recently, Joplin was honored with a star on the Hollywood Walk of Fame in 2013 as sister Laura and brother Michael were there to accept the honor. 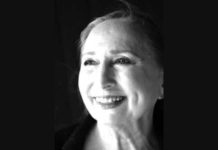 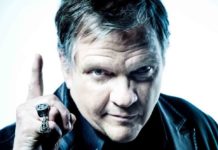 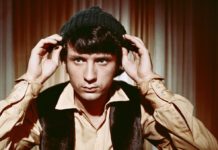