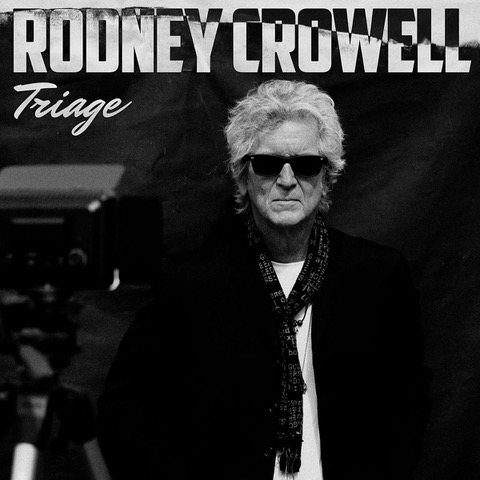 Just because Rodney Crowell doesn’t make bad records doesn’t mean he only makes great ones. Or at least not every time. In the 20 years since releasing The Houston Kid (easily one of the finest albums in the Texas singer-songwriter canon this side of Guy Clark’s Old No. 1), the remarkably consistent (and prolific) Crowell has actually come remarkably close to matching that masterpiece a lot more often than not. For proof, see 2003’s Fate’s Right Hand, 2005’s The Outsider or 2017’s Close Ties.

But his last album, 2019’s Texas, felt like a rare punt: long on extraneous special guests (never a promising sign) and a bit short on genuine keepers (save for one, the admittedly exquisite “The Border”). Again, not really a “bad record” by any means — but, as a whole, hardly representative of Crowell at his best. Which is to say, hardly representative of the Crowell heard in full on the new Triage.

A lot of the reason why Triage merits top-shelf placement is that it feels both tempered by fire and disarmingly vulnerable. Written and recorded in the thick of a worldwide pandemic and released just two weeks shy of Crowell’s 71st birthday, this is the work of an artist staring hard down the barrel of mortality, not with steely defiance but rather with a keen balance of penitence, bracing urgency and a zen sense of “Here Goes Nothing” come-what-may. “I’ve been a liar, I’ve been untrue,” he confesses at the start of the opening “Don’t Leave Me Now,” hat in hand and ashamed heart on sleeve. “To shatter your faith in me has torn my whole apart.” The song begins quietly, like an intimate one-on-one confession, but a minute and 10 seconds in, it shifts on a dime into overdrive with a surge of pounding drums and a Gaelic whirl of mandolin and guitar that startles like a code blue.

That wake-up call establishes right from the jump the high stakes at play all through Triage, as Crowell waxes philosophical about matters ranging from personal health scares (“Transient Global Amnesia Blues,” literally written from a hospital bed) to guilt (“The Girl on the Street”), the climate crisis (“One Little Bird”) and finding/maintaining faith — be it in mankind, oneself or whatever higher power there might be out there (“Something Has to Change,” “This Body Isn’t All There is to Who I Am,” “Hymn #42”).

Above all, though, Triage is a record about l-o-v-e with a capital “L,” unfettered by trappings of romance, sex or even the thinnest scrap of common ground. When Crowell declares, in “I’m All About Love,” that “I love Vladimir Putin and Benedict Arnold / I’m happy to say I even love Donald,” it’s clear that even if he’s kinda-sorta-obviously kidding, he still wants to believe it himself, because therein lies the path to enlightenment. Or as he puts it best in the last verse of the album’s five-star title track: “If Love is what we make it as you reap so you sow / The yang and yen the where and when the first and last to come and go / Then Love is all creation as Love is manifest / It’s love when we’re all given life and love when we’re all laid to rest.”

No, not every record Crowell makes is a “great” one, but Triage most definitely is. So move over, Kid.