At her recent record release show at the Continental Club in Austin, Shannon McNally explained that once she announced her upcoming release of The Waylon Sessions, she got used to being asked, “Why an album of Waylon covers?” And her honest response? “Because I can.”

That response is pretty damn Waylon of McNally, as is her decision to put together a feminine reading of songs connected with one of country music’s most swaggering and tough outlaws. While musically McNally’s renditions don’t stray too far from the original source material (not a bad thing), hearing these songs sung by a woman makes them feel reimagined. And the songs hold up well, as does McNally’s vocal performance, a testament to her strength as a singer, considering that Jennings had one of the best voices in country music. 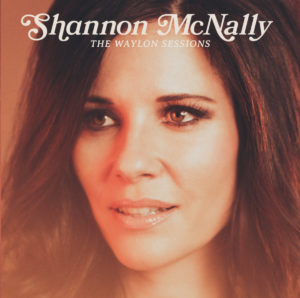 Featuring a stellar band put together by McNally and crack Nashville guitarist Kenny Vaughn, including longtime Jennings pedal steel guitarist Fred Newell and Texas keyboardist Bukka Allen, the band captured a live and raw sound over a five-day recording period. The album also features guest appearances by the likes of Jennings’ wife, Jessi Colter (“Out Among the Stars”), Rodney Crowell (“I Ain’t Living Long Like This”), Buddy Miller (“You Asked Me To”) and Lukas Nelson (“You Show Me Yours and I’ll Show You Mine” – the only non-Waylon cut on the album).

Ultimately, as strong as the band’s performances are, it’s McNally who has to sell the songs and deliver the goods, having to skillfully alternate between boot-stomping swagger and heartfelt sensitivity, and she delivers on both counts. With this album, McNally manages to put the spotlight lovingly back on one of the all-time country greats while also making these Waylon tunes sound fresh and just as much hers as his.