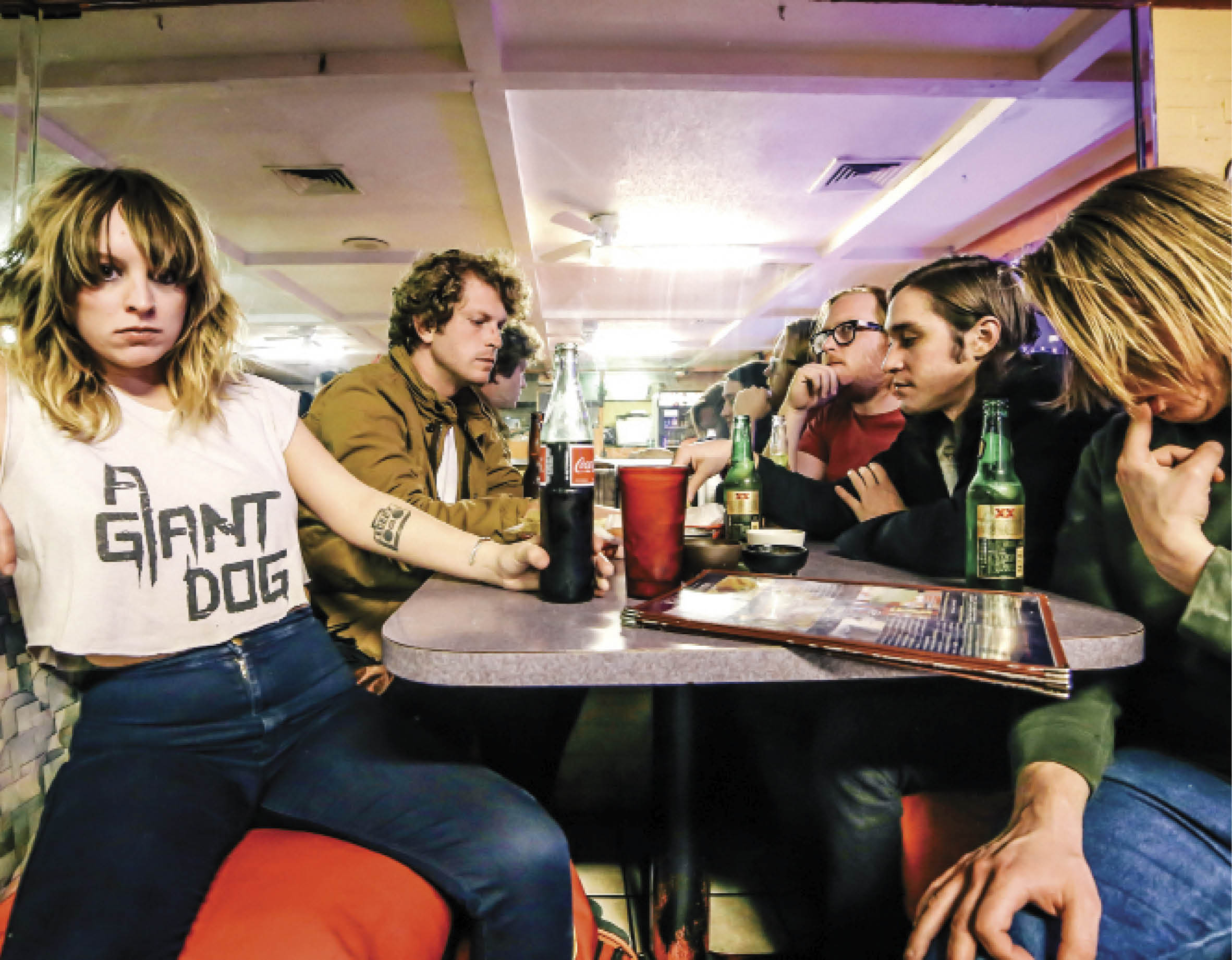 SABRINA ELLIS, singer for Austin’s alternative band A Giant Dog, isn’t the type of woman who minces words. Coming across like a young, female version of Iggy Pop or Alice Cooper (two of her musical heroes), Ellis is funny, kind of charming and just a little menacing. Like her band, she’s a swirl of opinions and contradictions.

“We’ve never been banned from a venue, but we’ve left some with the feeling that we shouldn’t return,” says Ellis while driving through Louisiana on the way to some shows in Florida. “We’ve had the cops come out to a club before — C-Boy’s. We were warned multiple times, then the cops came in and said, ‘What do you think you’re doing on South Congress at one in the morning making noise like this?’”

That noise is A Giant Dog’s signature style of post punk performed with a post-apocalyptic glee. Over the course of three albums, Ellis and her sullied group of transplanted Houstonians have made Austin clubs a lot livelier. And more dangerous.

Due to the visceral impact of the music and Ellis’ commanding stage presence, shows can tend toward the chaotic, but Ellis is always concerned over fans’ welfare. How sweet of her.

“The venues we play pretty much understand what we do,” says Ellis. “The other night there was this guy at our show dancing in spandex with a plastic bag over his head. I was worried about him. We haven’t taken it to the level of the Butthole Surfers. There isn’t blood or fire. I’ve pitched out some fireworks, but I had to because it was crowd control. I look out for the safety of the audience. I don’t know if the Surfers ever consider the safety of their audience.”

Besides the concern over  her fans, Ellis has other trepidations. After the Florida shows, the band heads to Philadelphia to begin a tour with Titus Andronicus. With crowds that should be among the largest the band has seen, perhaps Ellis might be a bit nervous.

“I’m not nervous about the tour,” says Ellis matter-of-factly. “Usually I get nervous about random type stuff. I’ll start to think about what if the van goes off a bridge. I don’t get nervous in front of a crowd because we’ve always played this balls-to-the-wall, high energy show. It’s the same if there are two people in the crowd or a thousand.”

So, if it isn’t the possibility of a large, unfamiliar audience that worries Ellis, what does? “We’re going to New Jersey, and I’m nervous about some Texas versus New Jersey type fights.”

Since moving to Austin just over eight years ago, A Giant Dog has been impressing the locals with its pugilistic blend of the Pixies and the Stooges. Throw in some surprisingly tight harmonies, and you have songs to sing along to while you mosh and crowd surf.

A Giant Dog’s most recent effort Pile, is a heaving and fantastically ugly set of songs that seethe like those of one of Austin’s legendary alternative bands: Scratch Acid. Songs like “Creep,” “Hitchhike Love,” and “Sleep When Dead” are infectious and spirited as the band mines everyone from the Velvet Underground to early AC/DC. Elements of punk and grunge flow in and out like welcomed interlopers as Ellis keeps it all together with manic intensity to spare.

The band’s press materials insist A Giant Dogs makes songs for losers, freaks and outcasts, a claim Ellis defends. “That’s the case,” she says. “The songs represent our dark world.”

Yet it seems the future is bright for this mangy crew. Besides just releasing their best effort, the band has already recorded a fourth full-length LP and will showcase those new songs while on tour. “We rushed right into the studio to do the next one because August was the only time all of us had off,” Ellis explains. “We finished writing songs in the studio, and we wanted to have the next product ready because we aren’t going to be around a lot in 2017. We’ll be back in Austin for 10 days in October, and that’s the only time we’ll be in town.”

Surprisingly, Ellis claims the new album will be a departure from the band’s former efforts. “[Guitarist] Andrew [Cashen] is nervous about how it will be received,” she says. “We have a while to get people really into the new songs while we’re out of town.”

Ellis says the new album grew out of an urge to shake things up and try some new ideas.

“The next album could be considered experimental. We played around with a lot of strange production ideas. We’re getting older. We’ve been around a while, and everybody was ready to try some new things. We wanted to stretch to the furthest of our abilities.”

As the band leaves its adopted hometown while on tour with Titus Andronicus, Ellis and the band will have time to contemplate just how much Austin has changed in the eight years since they arrived.

“The scene has changed dramatically,” Ellis says. “I definitely think the important things about the Austin scene are still in place. There are still venues that allow new bands to play. There is definite support among bands. Older bands try to help younger bands out. The negative thing is the impact of these large festivals that take over the town. They take over entire seasons, and they trump everything. I don’t think these festivals ever look out for the local artists.”

This trumping of the scene by SXSW, ACL and other festivals has influenced Ellis just to say no when these folks come a calling.“I’ve personally decided to decline offers from larger festivals,” says Ellis.

On the positive side of being in Austin is the friendship of Spoon’s Britt Daniel. Daniel has mentored the band and basically taken them under his watchful wing.  This has resulted in some nice opening slots for Spoon. Ellis is thankful for the attention, but she remains dubious of being appreciated by fans of Spoon.

“The ramifications of Britt’s support have been enormous,” she says. “We’re lucky to have that connection with him. Early on, he wanted to get people to pay attention to us. I thought maybe we were barking up the wrong tree by opening for Spoon. Some of their fans didn’t appreciate our band the way Britt does. But being associated with him has been really helpful to us.”

Besides encouragement, Daniel has given A Giant Dog some needed constructive criticism. “A few years ago, he really told us to get our shit together and get organized,” says Ellis. “He’s a true friend who’s helped things fall into place for us. He’s not afraid to tell us about our weaknesses.”

These days, those weaknesses appear to be few as A Giant Dog seems on the edge of a major career boost. With a bevy of new tunes to showcase and an impressive back catalogue to plunder, this upcoming tour would appear to be the time things all come together. And it all started with the decision to leave Houston almost a decade ago.

“It was nice to get out of Houston and get into Austin,” says Ellis. “We got chased out of our humid, smoggy wasteland. I had a detour in New York for a while before I ended up in Austin, but we’re all better off where we are now.”