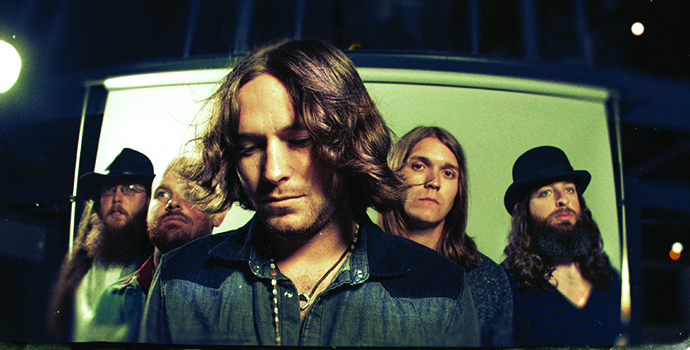 THAT’S THE PROBLEM with drinking,” Charles Bukowski once wrote. “If something bad happens, you drink in an attempt to forget; if something good happens, you drink in order to celebrate; and if nothing happens, you drink to make something happen.” The Whiskey Myers boys aren’t shy about their fondness for a little overindulgence now and then — “The thing about good stories with this camp is that usually when those occur, your memory’s a little foggy, you know?” lead vocalist and acoustic guitarist Cody Cannon says sheepishly — but it’s equally hard to get a straight answer out of them regarding the origins of their boozy band name. Spanish for “fightin’ chicken”? A wanted felon? The name of a drunk who lived down the river? “He’s actually a professional go-cart driver,” Cannon quips.

The Southern rock rebels’ third and most recent release, Early Morning Shakes, expands a bit on these themes of chaos and hard living; the title song specifically refers to that unnerving experience of being shaky, hungover and craving a change: “I wanna break away and just be myself sometimes / And get back all those things I lost along the way to the early morning shakes.” “That’s life on the road,” says Cannon. “Burning the candle at both ends.”

Whiskey went into the studio with only skeletons of songs and emerged with a completed album that feels fresh, raw and electric rather than excessively produced or rehearsed. “I hate writing choruses,” Cannon says. “I don’t write every day, but I’ll get in a mode and do maybe four or five songs in one day. I’ll go six months without writing and then write an album in a week.”

Cannon will be the first to admit there’s not much method to the making of a Whiskey record, but if chart rankings are any indication, the madness sure works for them. Sophomore release Firewater debuted at No. 26 on the Billboard country charts, and their third and most recent offering, the Dave Cobb-produced Early Morning Shakes, made an even greater splash. With soulful vocals, greasy guitar riffs and smoldering drums, the songs on this record, released in February, are indeed made for careening down the highway and swilling beers with your buddies, but they simultaneously tackle the tough stuff oft overlooked by your average rowdy bar band, fitting for a group whose musical influences run the gamut from classic country to Led Zeppelin, the Band and Neil Young.

“Where the Sun Don’t Shine” laments the challenges of a single mom, whose man “used to have a good job in a factory ’ til he lost his legs to an IED,” while the elegant acoustic ballad “Colloquy” riffs on the ravages of time in a relationship. “The first couple of songs we laid down, we were like, ‘Oh shit, this album is really dark,’” Cannon says. “But then we wrote ‘Home’ and a couple of others that made it feel a little better. We really just write what we feel, with no process. Sometimes you hear a melody, or something just pops into your head. Sometimes you’re playing guitar or doing a soundcheck. We don’t like to control it too much.”

Whiskey Myers are Cody Cannon on lead vocals and acoustic guitar; Cody Tate on lead guitar, vocals, and rhythm guitar; John Jeffers on rhythm, lead guitar, and vocals; Jeff Hogg on drums; and Gary Brown on bass. Not only is Brown Cannon’s cousin, but almost everyone in the band grew up in the Palestine area. “We’ve known each other our whole lives,” Cannon says. “We played ball together and all that good stuff.” Adds Brown, “It gives us a different dynamic since we were already close before we started the band. We don’t get into fights like other bands you hear about, and anytime we do, it’s kind of like arguing with your brother. You get over it, and next thing you know you’re best friends again.”

The first inklings of a musical future came when Jeffers’ dad taught his son and Cannon to play guitar when they were both about 16. Cannon, Tate and Jeffers played a handful of acoustic shows together early on, and a few years later the group moved into a house in Tyler, where they started writing their own songs and playing for friends. After a series of unsuccessful attempts to land live gigs sans connections or performance experience, the Whiskey boys tried a bar in Gun Barrel City that was known for having lots of live music: Gator’s. “The dude actually listened to the demo and was like, ‘I dig it. You all want to play this Saturday?’” Cannon recalls. “We had no real experience on stage, and we opened for Roger Creager. There were like 800 people there.”

Whiskey played over 200 shows in 2013, including supporting slots for Eric Church and the Eli Young Band, and they seem set to continue the trend in the new year, with a slew of Texas dates from Austin to Abilene, and a West Coast debut on the horizon. But the Texas quintet still manages to find time to stretch its legs.

“We had to spend the night on the bus in a parking lot in Nashville, and we talked John into racing the bus driver,” Brown remembers. “We’d always joked about racing, but we’d never actually done it before. We told this taxi driver that was driving us to the bus that he had to be the referee, because he was the only one who’d be unbiased. He kept saying, ‘No, no, I’ve got to get back to work.’ So we get to the bus, and the driver is wearing his shorts, and he’s stretching and stuff, and John comes off the bus in his underwear and a pair of tennis shoes. When the taxi driver saw that, he decided he had to be the referee. He couldn’t leave without seeing that happen.”