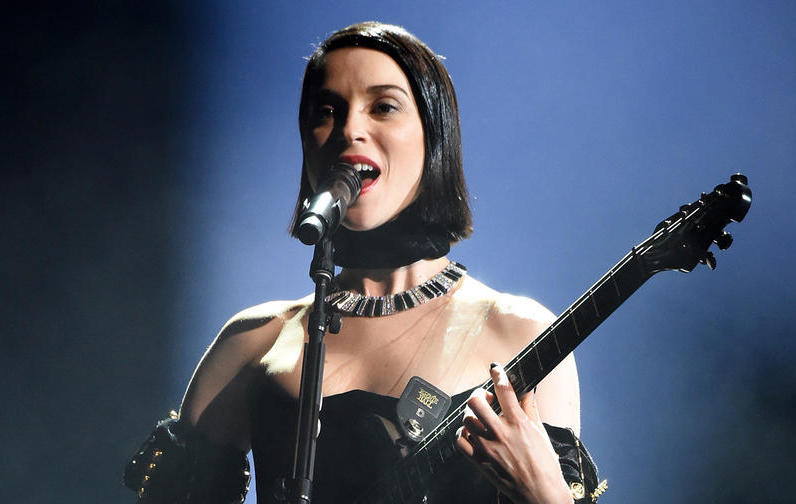 FIRST THINGS FIRST. Annie Clark, aka St. Vincent, has an admission: “I don’t dance.” Wait — but she dances all the time on stage. “I do choreographed dances in front of thousands of people, but I won’t dance at a party. ”

On the one hand, it’s a bit unsettling. Who could be unselfconscious enough to give the kind of dazzling, provocative performances Clark gives as St. Vincent, yet also be so acutely uncomfortable to be part of a dance floor throng?

On the other, there’s something apt about it. St. Vincent is a creation of stark formality: her music, definitely pop, echoes some parts of contemporary classical music in the precision of its form. Her shows, as she says, are tightly choreographed. It’s not a woman with a guitar fronting a band; it’s theater. And it’s brilliant.

The contrast between the creation that is St. Vincent and her beautiful and sometimes devastating songs has drawn comparisons to David Bowie and resulted in some of the best pop of the century. Her first two albums of this decade, 2011’s Strange Mercy and 2014’s St. Vincent, were masterpieces in which songwriting skill, brilliant production, accomplished playing and empathetic lyrics merged seamlessly into something compelling.

Her latest album, 2017’s Masseduction, reflects her feelings about the world. Her Twitter feed is politically engaged — and angry: “I want to wish a very happy Labor Day to the capitalist overlords who depend on worker exploitation to grow their already enormous wealth!” she tweeted just prior to the album’s release.

“I can’t engage with the media without being incensed,” she says. “The political is personal, and the personal is political. I couldn’t help but insert some of my anxiety and the collective anxiety into the music.” Still, she says, “I always have hope, because I see youth doing what they do best, which is to terrify the older generations.”

St. Vincent’s music is unusual in that it combines sensuality and intellect without ever sacrificing one to the other. That’s true, too, of her live performances. Her whole career has been based on some element of spectacle, first as part of the robe-wearing psychedelic choir the Polyphonic Spree, then as an angel-wing-wearing member of Sufjan Stevens’ band in 2006. Touring with David Byrne in 2012 and 2013 was her introduction to choreography, something she continued to astonishing effect on her subsequent tour.

“That particular show became like a physical exorcism for me,” she says, “and I wouldn’t be satisfied unless there was a little bit of pain or a lot of pain or bruises — I still have scars on my knees from that tour. That experience made me climb balconies and banisters and go absolutely insane. But the only way to get to what feels in some way like an exorcism or a transcendence is through an immense amount of structure.”

Since those shows, Clark has become more famous than St. Vincent. The latter might make the records; the former had relationships with Cara Delevingne and Kristen Stewart. She became the kind of person whose life is discussed with alarming frankness by unnamed “friends” in tabloids and gossip magazines. After she’d spent more than a year on tour with Byrne, he remarked on how private she was, how he felt he barely knew her any better at the end of the tour than at the beginning.

To be so suddenly in focus, then, must have been unsettling.

“It was very strange. I’d never experienced such an aggressive press, a press that felt so entitled to your time, to your information, to your life. The tabloid people don’t know my music — I’m just another picture,” she says.

“I hope people love it or hate it,” she said of the album, which reached No. 10 on the Billboard 200. “I’d prefer it be one or the other extreme — but I have no control over how they interpret it. And I feel fine and, in fact, relieved that I don’t have control over that.”

Just don’t expect her to dance to it.