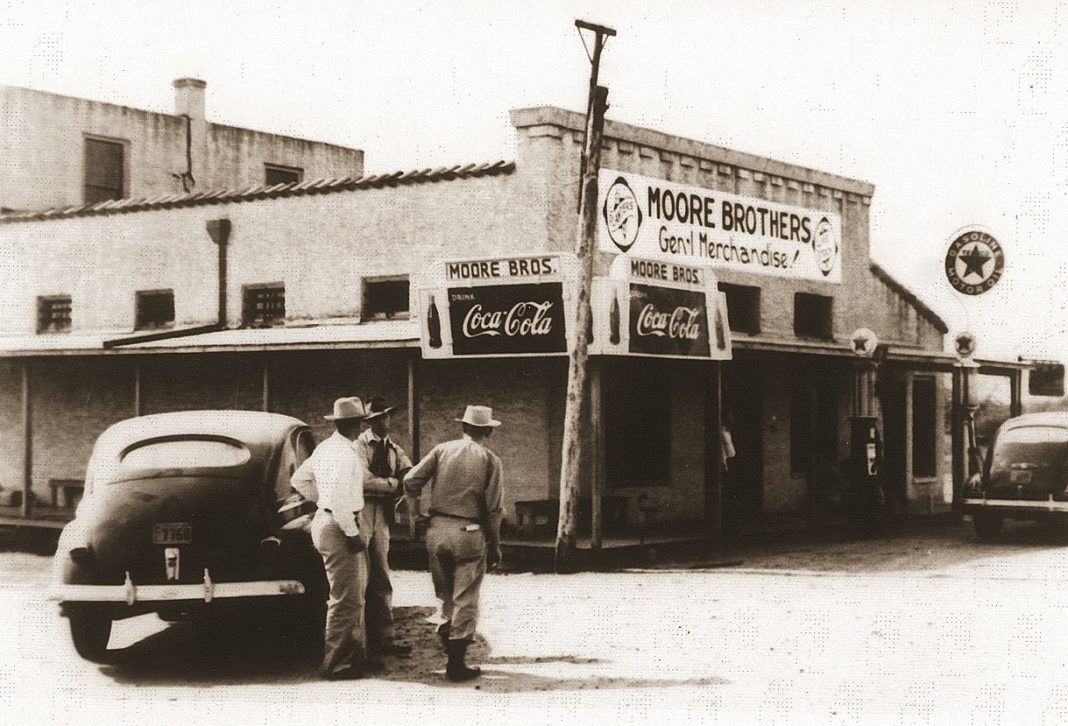 “Ain’t but one thing, people, I done wrong:
Moved my family down on Tom Moore’s farm”
—Mance Lipscomb

“Tom Moore’s Farm” is one of the greatest blues tunes to spring from the sweat in the Texas soil. Texas Monthly, in fact, listed it among “The 100 Best Texas Songs” in a 2004 article. Tom Moore’s Farm, the infamous peonage plantation, is part myth, part truth. A nefarious tale of Jim Crow Texas, it’s a vile history lesson many would choose to forget.

Cotton and slavery powered the Texas economy in the 1850s, and no area in Texas benefited more from slavery than Grimes County, blessed with rich, lush farmland along the Brazos River — cotton land. Three out of four Texans of the era never owned slaves, but Grimes was one of 17 counties in Texas where slaves actually outnumbered whites.

The loss of slavery after the Civil War and Reconstruction devastated Navasota and Grimes County. Freedmen (newly freed slaves) outnumbered whites 53 percent to 47 percent, and blacks controlled the voting booth. Whites formed a group similar to the KKK called the White Man’s Union. In the late 1890s, Garrett Scott was elected to consecutive terms as Grimes County sheriff by winning the black majority votes. Scott was well known for his fair treatment of blacks. He lost his third bid at re-election in 1900 when the White Man’s Union kept blacks from poll booths by burning and shooting into their homes.

Scott was threatened and pressured to leave office early, but he stubbornly refused. On Nov. 7, 1900, a white mob led by the White Man’s Union planted a sniper in the courthouse cupola. The sniper seriously wounded Scott. He was saved from sure death when his niece threw herself over his body. Scott and his family members holed up in the courthouse for five days till the governor called out the state militia. A wagon carrying the wounded Scott and family out of town was still fired upon.

More than 30 percent of the black population left Grimes County after the attack on Scott. The White Man’s Union gained control of every election in the county till 1960. In the late 1880s, a 20,000-acre farm called Allenfarm operated along the Brazos. John D. Rogers, an ex-Confederate, owned the plantation during the latter part of the 19th century. His namesake grandson took over managing the farm after the old man was fatally injured on a horse.

Allenfarm had a post office, a three-story depot, two cotton gins and a general store. Rogers and his family depended on leased convict labor to run the plantation. The state of Texas would lease out convicts for work, and Rogers paid the state for the laborers; if they didn’t pan out, he’d ship them back to prison and was refunded. It was a true penal colony.

Rogers preferred white convicts; he thought they outworked black convicts. On Jan. 1, 1914, Texas outlawed convict leasing for labor on private property. Rogers decided to get out of cotton, and, in 1922, he sold parts of his farm off to four Moore brothers: Clarence, Harry, Tom and Steve. The Moore brothers would buy out the entire Allenfarm area by 1928. Harry and Tom became a force in the Brazos valley and launched a cotton dynasty. The combined farm was 18 miles across with a company store, a blacksmith shop and its own cotton gin. It was 18,000 acres, all self-sufficient.

Standin’ on the levee, spurs in his horse’s flank,
Watchin’ his boys, man, from bank to bank

The farm was an hour away from the local Sheriff, but that didn’t matter. Harry Moore was deputized an honorary Texas Ranger, and he carried a badge and a pistol. Outsiders didn’t investigate complaints; local state troopers who dared interfere with the Moore brothers were transferred to Far West Texas.

The Moore farm was a classic tenant farm. Some workers were trucked in for day labor; other families lived on the farm. They were given a shack, a garden area, a cow for milk and chickens, and cash if needed. Of course, any loan or credits at the company store were owed back with interest. The day started at 4 a.m. — a huge bell rang for breakfast at 5 a.m., and workers were in the field by 6 a.m. The bell would ring again at noon for beans and cornbread, and work ended at 6 p.m.

Tenants lived in a vicious Catch-22, constantly trying to work off debt. Tom and Harry Moore also discovered a loophole in the 1914 state law. Convicts (mostly poor, illiterate blacks) were pre-paroled to the farm for labor. The Moore brothers paid them the same fee as regular workers, but if they tried to escape or leave early, they were shipped back to the penitentiary. One worker who fled was tracked all the way to Mexico and brought back to the farm.

It was harsh work — the land to be cleared was covered in ragweed, briars and poison ivy, and was crawling with poisonous water moccasin snakes as big as a forearm. Mosquitoes, ticks, biting flies and high humidity made the work even more brutal. There were reports of parolees vanishing if they talked back.

Tom Moore whips you, dares you not to tell
“You be at the lot in the mornin’ when my lot boy ring that bell”

In his memoir, I Say Me for a Parable: The Oral Autobiography of Mance Lipscomb, Navasota blues singer and sharecropper Mance Lipscomb noted, “Tom Moore — listen me good: he could put you in the pen just like a fattening hog if he wanted to. You wasn’t in the pen when you got here, but you was worse in the pen!” Moore was a personal friend of many politicians in Austin; he could pick up the phone and call U.S. Sen. Lyndon Johnson directly. (Even when Johnson was president, Moore called him.) During World War II, Moore used German prisoners to work alongside paroled black convicts. “He made the calls, he did what he had to do — it was tough times,” says one modern relative of Moore.

Lipscomb, in his memoir, says it was more than tough: “Every year somebody got killed. A man was shot down right close to me. Did the colored man say or do anything about the killin’ goin’ on? No, no! We had two men fight back, and they got lynched!”

Lipscomb never worked on the Moore farm — he was a sharecropper on a farm next to Moore’s plantation — but he often played there for Saturday night dances. In the early 1930s, he met a young sharecropper named Yank Thornton. Thornton, fed up with the brutal working conditions on Moore’s farm, made up some verses that captured his feelings, and he asked Lipscomb to put his lyrics to music. “I said, ‘Boy, you better not sing that here!’ — and he says, ‘Mista Moore home asleep,’” Lipscomb recalled. “He commences to sing, and I put it to music — everyone gathered ’round, ’cause all he said in the song Mr. Moore had done. I played it in certain places, others added verses out in the field. The song will never be ended — it happened … it’s what Tom Moore done.”  Lipscomb later added, “If Mister Moore know what I done, he come up here shootin’.”

In 1942, Marcellus Thomas, a blues singer from Mart, Texas, ran into another blues singer, Texas Alexander, in Dallas, who was working at a Texaco service station. Thomas recorded an interview with Chris Strachwitz of Arhoolie Records in 1961 in which he recalled, “Texas [Alexander] was singing that song about them four mean Moore Brothers.” In the next few years Alexander would sing on the tracks of Deep Ellum at night and busk off and on with his protege, Sam Hopkins. Hopkins admitted several times that Alexander taught him the song. In 1946, Hopkins recorded some sides in Los Angeles for Aladdin Records. None of the singles sold that well, but Sam received his famous nickname — Lightnin’ — while in California.

By 1948, Hopkins was back in Texas, recording for Bill Quinn’s Gold Star Studio in Houston. Quinn bought Hopkins an electric guitar — it was the up-and-coming sound. (He even put “Electric Guitar!” on the labels.) Hopkins’ records enjoyed local juke box success, but nothing big.

Hopkins discovered that he loved the sound of the electric guitar. Mississippi blues songs sounded “tinny,” but Hopkins’ guitar was deep with a thumping bass sound. He recorded “Tom Moore’s Farm,” hoping to avoid the wrath of the Moore brothers by changing the song to “Tim Moore’s Farm.” The song reached No. 13 on Billboard’s chart of the Most Played Juke Box Race Records on Feb. 12, 1949. Lightnin’ Hopkins’ name began to receive national recognition.

The song title didn’t fool anyone in Grimes County. Tom Moore reportedly said, “Lightnin’ Hopkins from Houston — if I see that bastard, I’m gonna kill him.”

Hopkins’ “Tim Moore’s Farm” is the original bridge from the blues to rock ’n’ roll protest songs. Over the course of its life, the song existed in at least six versions. Lipscomb says he kept the song hid from Tom Moore for 30 years. In 1960, Moore encouraged blues historians Chris Strachwitz and Mack McCormack to seek out Lipscomb by calling him “that ni**er guitar player.” (Moore didn’t even know Lipscomb’s name!) Moore thought Strachwitz and McCormick were FBI agents since he was under investigation.

Lipscomb finally agreed to record “Tom Moore’s Farm” — 11 years after Hopkins’ version — with the stipulation that the singer be listed as “Anonymous” on the label. He was still deathly afraid of the Moores. Lipscomb, the songster who would later play for Frank Sinatra and Mia Farrow on Old Blues Eyes’ private yacht, was never comfortable performing the song. “Well, there’s people been killed on Moore’s Farm. I’m just tellin’ y’all,” he explained. “Shot down in the cotton patches but claimed it was heat stroke.”

“Standin’ on the turnrow with his pistol in his hand,
He done whipped a woman, now he gonna shoot her man”

Was Moore’s farm truly that bad? In 1948 a story appeared in several newspapers under the headline “FBI Investigates Man Beaten for Wanting to Aid Child.” The articles recounted how John Roe, a paroled convict, was assigned to the Moore Farm. When Roe found out his son was seriously ill, he asked to borrow a truck to take the boy to the doctor. He was refused. When Roe persisted, he was viciously pistol-whipped by the peonage boss. Roe ran to seek help and was found with a broken wrist, cut lip and numerous cuts on his body. He left his wife and child behind, their fate unknown. There is no mention of a grand jury ever indicting anyone for the beating.

Today the descendants of Tom and Harry Moore are well respected in the area and own several businesses, including a feed mill. Harry Moore’s great grandson and his wife operate a special events venue for wedding receptions on the original Moore Ranch.

But if you ever call a local person familiar with the old Tom Moore Farm and ask for a quote or an interview … the person will quickly become anonymous.

One of these mornin’s, boys, and it won’t be long
Tom gonna call me, yes, and I’ll be gone

[Writer’s Note: Thanks to Jay Brakefield and Russell Cushman for research and assistance.]