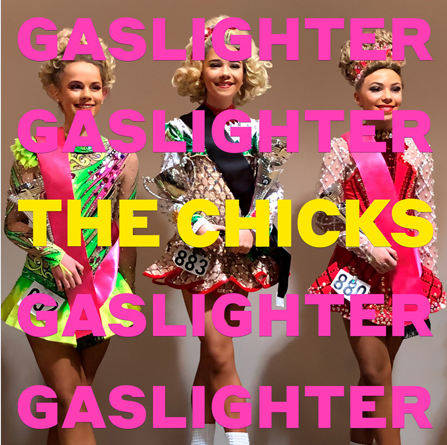 It was the best of timing, it was the worst of timing. For fans of the formerly known as Dixie  Chicks, the mid-summer release of The Chicks’ first new studio album since 2006 was a bright spot in a seemingly endless year of quarantine malaise. And, buoyed by a robust media push and the warm afterglow of a highly successful 2016 nationwide amphitheater tour (the trio’s first U.S. headlining tour in a decade), Gaslighter seemed primed to ignite one of the biggest musical comebacks of the last 20 years. But of course, all of that was planned in advance of the entire concert industry slamming to a halt under lockdown, leaving Natalie Maines, Martie Maguire, and Emily Strayer ready to run but with nowhere to go. And just like that, the buzz on The Chicks’ triumphant 2020 return fizzled quicker than, well, Tiger King.

A bummer? Sure — but maybe a blessing in disguise. Doubtless the whole campaign will ramp up again eventually, but given room to breathe outside of the hype, Gaslighter can be better appreciated for what it really is: Not an overt “Album-of-the-Year-or-bust” play so much as just a dozen good to great new songs that aim more for expressing personal and musical growth than storming the charts. That might seem a curious read on an album co-written and produced with Jack Antonoff, who’s been one of Taylor Swift’s key collaborators throughout her own blockbuster pop crossover. His involvement was clearly very hands-on, too, in dramatic contrast to the “just show me what you did today” methodology of Rick Rubin, who helmed 2006’s Taking the Long Way.

But the results are revelatory and invigorating; equal measures sassy and vulnerable, Gaslighter is far and away The Chicks’ most eclectic and adventurous album to date. It’s packed with playful feints and twists, right from the way the anthemic opening title track mischievously teases a diss on old No. 45 but is in fact really (or at least mostly) aimed at Maines’ ex. The firebrand singer actually addresses her recent divorce head-on throughout the album, sometimes venting (“Sleep at Night,” “Tights on My Boat”), other times reflecting on the aftermath with disarmingly sincere maturity (“Young Man,” “Set Me Free”), and that confessional stance in itself charts new ground.

Although her powerhouse vocals have long been front and center in The Chicks’ sound, apart from a couple of key songs on their last album, this is arguably the first time Maines has used that voice to share her voice — and she sounds both empowered and humbled by it. Meanwhile, sisters Strayer and Maguire aren’t taking a back seat here by any means: those formidable banjo/dobro and viola/violin (if maybe not fiddle and mandolin) chops remain integral to the mix throughout. But as ever, it’s ultimately the sound of all three Chicks singing together that really delivers the payload, burnishing even the less memorable tracks on Gaslighter (of which there are at least a couple, par for the group’s course). And when they marry those perfect harmonies to the walloping emotional and melodic sweep of career-best standouts like “My Best Friend’s Weddings” and “Julianna Calm Down”? Hold on tight and mind the goosebumps.