Is Matt the Electrician a musician or an electrician? Yes.

Is he a West Coast transplant or, after 25 years in the Austin music scene, does he qualify as an Austinite? Is his music neo-folk or does it defy the pigeonhole? Can he see humor in hopelessness, happiness in the sad?

Yes. Yes. Yes. In short, Matt Sever, better known by his stage name, Matt the Electrician, is comfortable with ambiguity.

He’s been asked a thousand times over the years, “Are you really an electrician?” And he’s heard all the jokes — “Do you know Joe the Plumber? Bob the Builder?” But when Sever moved to Texas in 1996 and began wiring houses around Austin, playing music full-time was always what he wanted to do. And fortunately, he still does.

He got his start in the scene at the much-missed Flipnotics on Barton Springs Road, where he hosted an open mic night once a week. Still covered in the grime of a day’s work, Sever would introduce himself. “Hi, I’m Matt. I’m an electrician.” The name stuck.

He apologized for his appearance but never for working. The stigma against artists having day jobs is something Sever has, over the years, intentionally opposed. “It was like if you haven’t completely quit and just focused on music,” he explains, “you’re not serious enough about it.”

But Sever did take his music, if not himself, seriously. “The art,” he says, “is a serious thing.” In 2002, he hung up his pliers and transitioned to music full-time. Though for Sever, making music is just another kind of work, and it’s part of the reason he remains an “Electrician” long after leaving the profession. “Embracing that name was owning that we all do these other jobs,” he explains. “One thing I don’t like about being an artist is the precious nature of it. I don’t think it’s precious. It’s another thing we as humans do. We make art.”

When it comes to his songwriting, too, Sever’s philosophy is pragmatic rather than precious. He takes what he calls a “sideways” approach, building off moments of inspiration, and playing songwriting activities like Songtober — a game of his invention inspired by the drawing challenge Inktober, improving his chops through a daily (mostly) songwriting discipline. These practices have yielded 13 albums and plenty of songs which, sadly, may never make it on to an album.

But the image of the troubled genius, the romanticized self-destructive figure upon whom songs are gifted from the heavens, continues to suffuse musical mythology. It was something Sever grew up with, and it still contributes to the harmful idea that you have to suffer for your music. Through his work, Sever’s shown that grit and stick-to-itiveness can produce thoughtful, fun and, at times, incredibly moving music.  And he’s not afraid to share that fact. “We’re in a time when we’re allowed to demystify [the songwriting process],” Sever says. “Whether that’s musicians being more open about sobriety or the fact that we have normal lives, kids, houses and other responsibilities. It’s not just sitting in a dark cafe waiting for a song to visit us.”

Sever’s discipline and playfulness in the creative process translated to the recording studio for his newest album, We Imagined an Ending. The album was recorded at producer Tucker Martine’s Flora Recording and Playback in Portland, Oregon. Martine decided to work with Sever, who he’d met the year before, after hearing a demo. “I loved making this record with Matt,” Martine says. “He was thoroughly prepared but also open to being surprised by new directions that were born out of the collaborative process.” Prepared yet flexible. Add that to the list of ambiguities.

Ida Wenøe, the album’s backup singer, describes Sever and Martine’s creative energy as like that of teenagers. “It was easy to fit right into that,” Wenøe says. “The harmonies came easy, and a majority of them were created on the spot. I think the energy in the room played a big role. Having a good time professionally and also personally makes for a better result.”

We Imagined an Ending, wrought with the same sideways songwriting approach as his other albums, supplies the relatability and humor for which Sever’s known. But the songs, ranging from wistful (“When the Lights Went Out”) to exuberant (“Dance”), aren’t necessarily as straightforward as they seem. The album was released in November, but its inception lies in the “hyper-insane reality,” as Sever puts it, of our country’s political state in 2018.  In a world increasingly divided, the album dances nimbly in the realm of nuance.

A concept album in which Sever set out to invert the seven deadly sins, We Imagined an Ending focuses on the virtue implicit in the vice, the light being brighter because of the darkness surrounding it. It’s a reaction to the way Sever saw people responding to a chaotic and fractured time. “There was a lot of art reflective of that,” he notes, “and the reflections seemed to be dark and intense.” Dark and intense — two places Sever steps but rarely lingers.

In the album’s playfully upbeat second track, “Big Changes,” string accompaniment and Wenøe’s silky harmonies soften Sever’s signature rasp. The song was inspired by a family hike through the Sierra Nevada, where he learned the mountains had been at the bottom of the ocean eons before. Sever reflects on the vast scope of Earth’s existence, the incredible geological changes and humanity’s relatively small problems in the pithy line, “This place will be so cool when we’re gone.” Regardless of what tumultuous time we find ourselves in, Sever reckons, “it’s gonna be cool for something.” He adds, “It just might not be us.”

“What if You Needed Me,” a slow and dreamy nod to doo wop, addresses the importance of community when things are going well, but even more so when they aren’t. Sever ends the song by asking “What if you needed me, and I never knew?” Martine calls his favorite track “a poignant reminder not to assume you know what other people are going through. Plus, you get to hear Matt play the horn, which is a delightful sound.”

While in each song Sever focuses on virtues — equality in “Temporary,” faith in “Night Owls,” prudence in “Home Again” — nowhere is his message of “sad acceptance” and silver linings more apparent than in “When the Lights Went Out.” The most musically pared down on the record, Sever’s deceptively simple picking and searching vocals keep you wondering until the end, what happens when the switch is flipped? The final verse answers that question when he sings: “When the lights went out / We all stared into darkness until it was aglow … When the lights went out / We had to light the way.” This song isn’t just about Sever. It’s about all of us: the human spirit and the indomitable hope that helps us persist through our darkest hours.

The idea of virtue out of sin and hope out of a hopeless situation is consistent with Sever’s approach to both this record and life in general. “I tend more toward the hopeful,” he says.

Wenøe, Sever’s friend for more than a decade, confirms this. “I’ve never seen Matt lose it,” she says. “I think it’s because he turns to humor every time he experiences something frustrating, and he somehow manages to do it with great warmth and empathy.”

While We Imagined an Ending is conceptual, it didn’t start out that way. In the past, once Sever had 10 or 15 songs, he had an album. Themes emerged from seeing how those songs together formed an arc of what was going on in his life. In fact, he didn’t realize that musicians took the theme-first approach until he learned that Martine’s wife at the time made records this way. “I’d already written a bunch of songs,” Sever says. “I thought, What if I looked at them through the lens of virtues instead of sins?” The idea, turns out, fit nicely. Sever adds, “I didn’t have to force anything — just overlay a theme already there.”

The ambiguous album title was taken from a line in “When the Lights Went Out.” “We imagined an ending and then tried to let it go.” Who imagined an ending? An ending to what? Will it go on forever? Sever embraces the title’s many possible interpretations, layers of which have been added by COVID and 2021’s winter freeze. “I like phrases and words that have multiple meanings,” Sever says. “And I like the idea of songs meaning one thing to the artist, but then people will say, ‘I thought it meant this.’”

Through the songs, Sever explores how things have a way of working out differently than anticipated. In “Switch Shadows,” he sings, “Everyone said the time would fly, and all the days were diamonds.” A wistful reflection on finding gems in the place of our thwarted expectations, even if we can’t recognize them at the time. “I lost my mother in 2018,” he recalls. “When you lose someone, you don’t actually know what it feels like until it happens. We all imagine endings to things, our own lives, other people’s lives, and then something happens and it’s just so different than what you imagined.”

Rather than lamenting it, Sever believes life’s unpredictability should be met with a nuanced view, though that’s not as common as he’d like. “We live in a culture where nuance is hard to find,” he says. “Everything is extreme — extreme bad or extreme good. It’s a destructive way to go through life. If it doesn’t ruin everything around you, it will ruin you from the inside.”

In some songs, like “Night Owls,” the nuance is subtle, its spare guitar, somber tone and lyrics in step, despite its message of faith in the face of loss. But in others, he achieves what he calls “happy-sadness” through the juxtaposition of contrasted elements. “One of the darkest songs on the record is ‘Dance,’” Sever says. “It’s super crazy, poppy, upbeat. But lyrically it’s a dark song about balancing honesty and honesty with oneself. Art speaks louder and clearer when there’s some contrast to it.”

Though he prefers to leave the descriptions and interpretations to others, each song is suffused with Sever’s ability to see the humor in tragedy and find the bright side of any situation. He says this is just part of the way he’s wired.

“I’ve been this way since I was a kid,” he says. “We were on food stamps, and we didn’t have the things we needed all the time. And yet, there’s always been this sense of both hopefulness” … he pauses … “and humor in the hopelessness.” 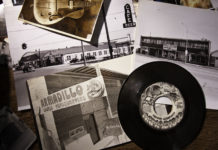 50 Years Ago, Willie Nelson United Cowboys and Hippies at the Armadillo World Headquarters