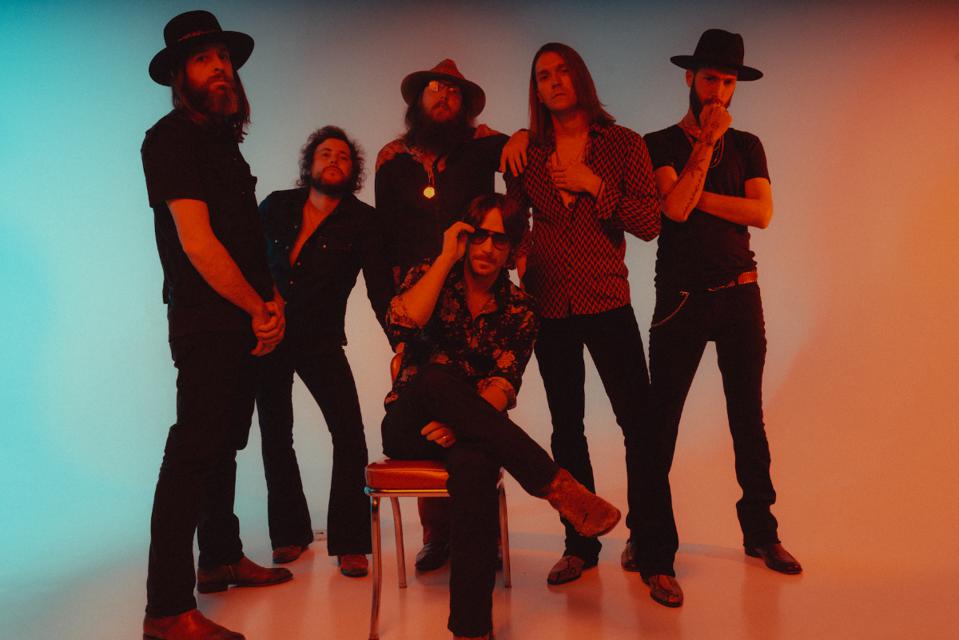 It’s been a whirlwind summer for Whiskey Myers. The Texas-based band has sold out shows, added tour dates and played national venues like Red Rocks in Denver and Bonnaroo in Seattle — all while building momentum for their new, self-produced album, Tornillo.

“We’re pretty proud of what we’ve got on this album,” lead guitarist John Jeffers says. “And we’re excited for people to hear it.”

The same day they released the album, they debuted a music video for their single, “John Wayne.” At six minutes long, set in an Old West backdrop and featuring actor Danny Trejo, it’s more of a short film than a music video.

For anyone not familiar with Whiskey Myers, the guitar-driven group has become known for high-energy, arena rock shows, and a musical style that often blends Southern rock, country and blues. But their sound is difficult to categorize or pigeonhole because it’s uniquely their own. And Whiskey Myers is constantly pushing the creative envelope.

“I feel like the guys are genre-less,” says Eddie Kloesel, the band’s manager. “They strive to just make the music they want to make whether it’s rock or country or wherever it fits.”

Tornillo is a prime example. The album features 12 tracks, most of them written by lead singer Cody Cannon, two others written by lead guitarist John Jeffers. Depending on the song, musical influences can range from Lynyrd Skynrd to Little Feat to Waylon Jennings to the Rolling Stones. But — bottom line — Whiskey Myers is doing what they do best … their own thing. 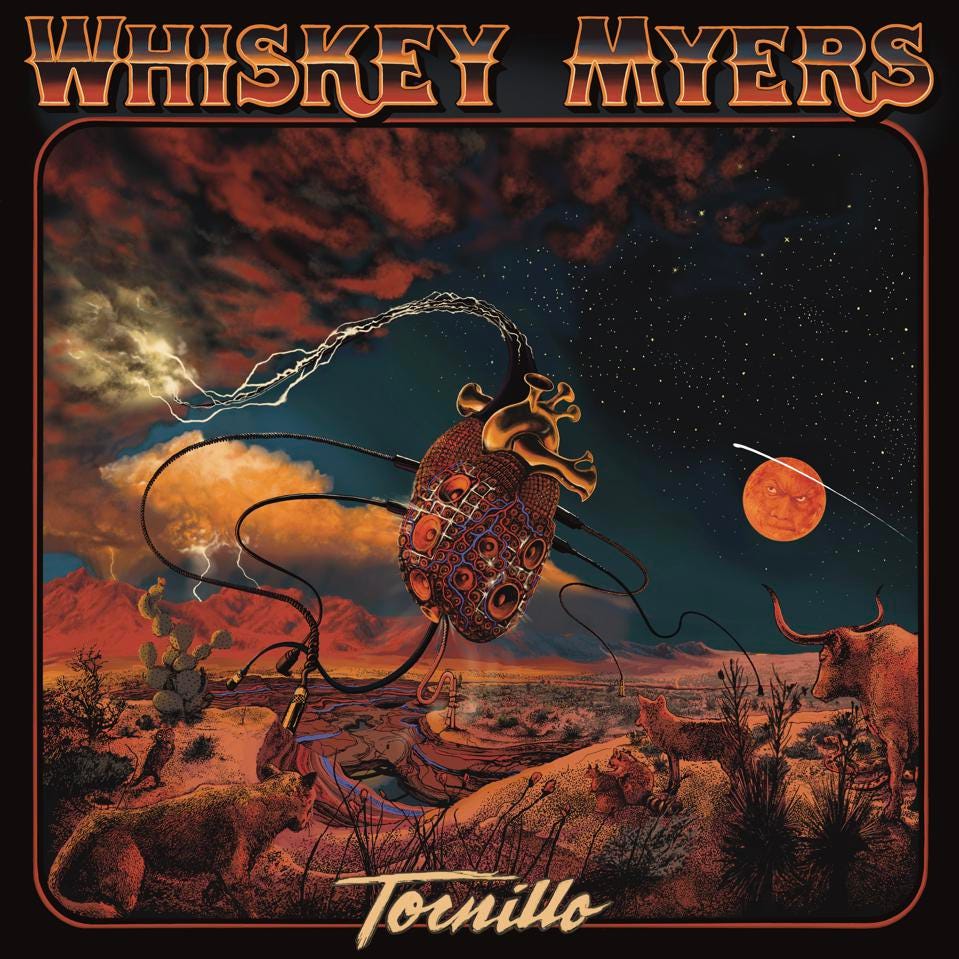 For this, their sixth studio album, they wanted to try something different. For a while now, Cannon says he and other members have wanted to add horns to the mix. “This was the second album we produced ourselves, and we wanted to change it up a little bit to show our versatility,” he explains. “It just worked out where it was perfect for this record. In the back of my mind, when I was writing the songs, I could kind of hear horn arrangements. And when we got into the studio it was like, ‘Let’s just put it on all of them.’” He laughs, then adds, “or most of them anyway.”

And though it might sound slightly different than some of what they’ve done in the past, songs like “The Wolf,” “Whole World Gone Crazy” and “Heart of Stone” all feature the sort of lyrics their fans have grown to love, reflecting real life and real experiences. “It’s still us at the core,” Cannon asserts.

Producing Tornillo was a collective effort for the close-knit group that formed in Palestine, Texas, 16 years ago. Cannon says they’ve known each other and worked together so long, they can “look at each other and know what’s going to happen.”

And from the beginning, they’ve shared the same goals for the band and the music. “We were always about the work,” Cannon says. “We never gave a shit about anything else — we just wanted to play shows. We didn’t care about being famous or walking down red carpets or taking pictures. And I think our uniqueness, writing songs the way we do in our style, came out of that. We didn’t really care about anything else.”

During their first 10 years together, they played clubs consistently, building a strong and loyal Texas fanbase. Then, about six years ago, they began taking their music to other parts of the country. Meredith Jones, an agent with Creative Artists Agency, was instrumental in helping them map out a strategy. She recalls telling them, “I want you to go all the way up to Maine, all the way up to Seattle, down to Miami, over to San Diego, like the whole breadth of the country. And then, international as well.”

Once they broadened their reach and more people began discovering their music, things started to happen. In 2018, their song “Stone” was chosen for the TV show Yellowstone, and Whiskey Myers became the only band to perform on the show itself. Since then, they’ve had nine songs featured on the Paramount series.

The following year, they were invited to open at a stadium show for the Rolling Stones. Jeffers says he was told Mick Jagger was going through videos on YouTube and just happened to run across one of Whiskey Myers. He describes the experience as a pinnacle career moment. “I don’t think you can get much better than to open up for the Rolling Stones,” Jeffers enthuses. “And especially as we were there before Charlie [Watts] passed away. We got to hang out with them and take some pictures. That’s a hard one to top.”

In June of this year, Whiskey Myers got to headline Red Rocks. It was a dream come true for the band that had turned down offers to perform there in the past, holding out until they could headline the venue. Tickets for the show sold out in less than a day. It was a long-awaited opportunity, and they made it count. “They didn’t just show up at Red Rocks and perform the same old show,” Jones says. “They brought in singers, they brought in horns, they made sure they looked cool. They take seriously how they portray their art in these big moments.”

And after Red Rocks came Bonnaroo.

For an unsigned, independent band without the backing of a big record label, their success is unprecedented. At last check, they were at more than 1.8 billion streams of their music. And they’re not only selling out shows, they’re selling merchandise at near the same level as Miranda Lambert, Kenny Chesney, Chris Stapleton and others. They’re also seeing success with their own brand of bourbon and coffee.

“These guys have developed an incredibly loyal fan base that wants to come see them over and over again, year after year,” Jones says. “And they keep bringing other fans into it, bringing their neighbors into it, their friends into it.”

And as much as fans are drawn to the music, they seem to appreciate what the band represents.

“I really do think it’s their authenticity,” Kloesel says. “What you see with these guys is what you get. Even if you don’t listen to their music and you just read the lyrics, there’s no question about how this band grew up and what they stand for. They’re blue-collar, hard-working people. They just do it with a guitar in their hands.”

That’s not going to change, according to Cannon, despite their growing success. Whiskey Myers will continue to focus on what matters most — writing songs, playing shows and creating their own brand of music. “At the end of the day, we’re just out here doing it,” Cannon says. “We’re doing the same thing we’ve always done. There are just more people listening.”

This story originally appeared on forbes.com. 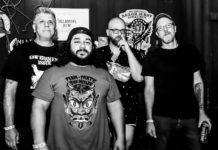 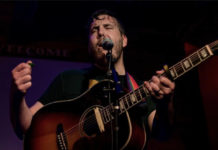 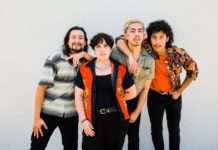