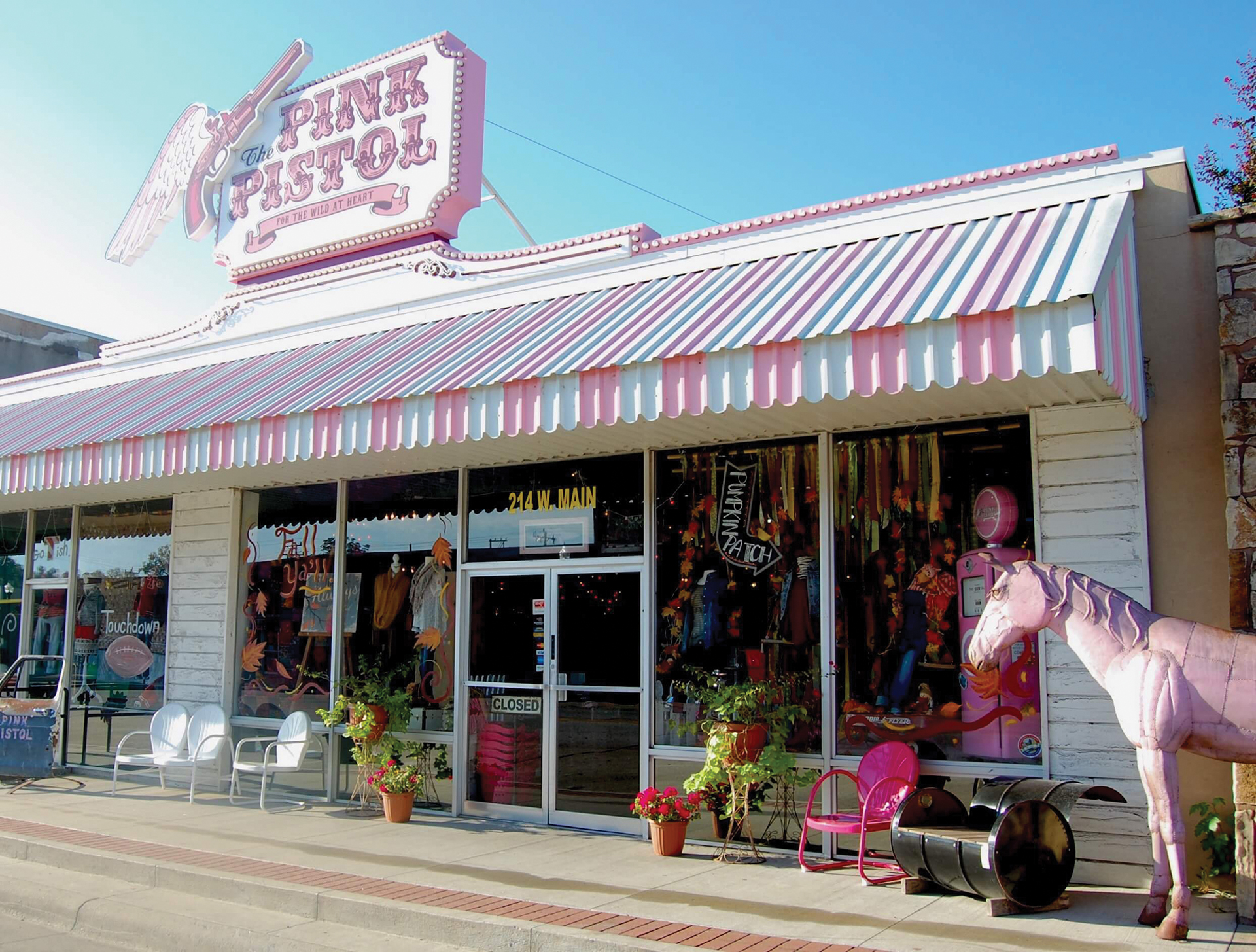 WELCOME TO Lindale,” announces the vinyl billboard with a picture of a platinum blonde holding a guitar. “Hometown of Miranda Lambert.”

Hundreds of visitors — many of them devoted “Ran Fans” — flock to town each week to check out Lambert’s retail spin on her rebellious and rocking style of country music.

Raised in a musical family in Lindale, the 35-year-old Lambert cut her musical teeth as a teenager in Texas before hitting it big in Nashville. She opened the Lindale shop in October 2013 after experiencing success with her original location in Tishomingo, Okla. Both small towns have seen an increase in tourism and economic development thanks to Lambert’s fairy godmother-like magic wand of entrepreneurialism.

“The Pink Pistol has brought a big boost to our downtown area, just from the number of people who come here for that store,” says John Clary, president of the Lindale Economic Development Corp. “Some of them stay in our hotels, and some of them eat in our restaurants. The store has really perked up traffic and it’s been a good catalyst for new business.”

Housed in a 4,000-square-foot brick building adorned by a pink-and-white-striped awning, the Pink Pistol is an explosion of sparkly, quirky fun. Display tables at every turn bear kitschy gifts and knickknacks, like pink chrome flasks, cotton candy-scented candles, temporary tattoos and dangly silver revolver earrings. Souvenir T-shirts and tank tops printed with the shop’s winged-revolver logo and the caption “for the wild at heart” hang on the walls, along with Polaroid snapshots of guests from faraway places — a nod to lyrics from Lambert’s song “Automatic,” which encourages picture-taking, “the kind you gotta shake.” A quick tour of the store, comprised of multiple rooms in a maze-like layout, reveals fashionable finds like embellished denim cut-off shorts, Aztec-print miniskirts, fringed handbags, sequined clutches, leather cuff bracelets, guitar-pick necklaces and cowboy boots of all colors.

“I should get this one for my sister,” says one shopper, holding up a white tank top with the words “Mama Tried” printed in black.

On this typical Friday afternoon, the store bustles with shoppers, including young couples, families with small children, girlfriend groups and one sizable bachelorette party (identifiable by matching T-shirts and pink hair accessories).

Located below a pink chandelier in the middle of the store, a small bar with pink glittery stools offers customers a chance to taste wines from Red 55 Winery, Lambert’s brand of wines named for her first pick-up truck — a candy-apple-red ’55 Chevy sidestep. Lambert’s parents, Rick and Bev, manage the winery, which produces and bottles the wine in Brownfield, a High Plains town near Lubbock. Customers participate in a tasting of all nine varietals, including whites and reds named after Lambert songs and a blush called Electric Pink for her guitar.

“The most popular is probably Crazy Ex-Girlfriend,” says the server while filling small plastic sample cups with the sweet white table wine. Another favorite is Kerosene, a straw-colored, dry and tart white wine named for Lambert’s first hit single.

“She comes in pretty regularly,” the server says when asked about Lambert’s involvement in the store. “She likes to work on the window displays. A lot of times people don’t even notice when she’s here.”

Lambert’s decorative touches and love for antiques are apparent upon closer review of the Pink Pistol. An avid “junktiquer,” the singer makes regular trips to Round Top, Texas’ antiques capital, to search for weathered and worn finds to repurpose. Decor like classic toys, books and a vintage mannequin head or two enhances the eccentric merchandising presentations throughout the store. Many wares are housed in antique suitcases and trunks or rustic armoires, some painted in shades of pink and turquoise. Vintage lace-up boots prop up the menu signage in the store’s coffee shop, which is located in a back room and keeps shoppers caffeinated with espresso, cappuccinos and lattes.

Many of Lambert’s framed platinum and gold records, including best-selling singles like “White Liar” and chart-topping albums like Four the Record, hang along the pink-painted wall by a staircase that leads guests to a second story, which holds kids’ clothing, sale items and Lindale Eagles T-shirts from the local high school. Guests often pose for snapshots in front of the awards, as well as outside under the entrance sign.

As customers head out, they appear loaded down with Pink Pistol souvenirs, including a pink tank top, a hot pink to-go cup for coffee and a pink candle in a mason jar. They may not be huge fans of pink, but they’re fans of Lambert. There’s something about the Pink Pistol that makes one want to emulate Lambert’s small town-loving, wild-at-heart spirit — and her passion for pink.